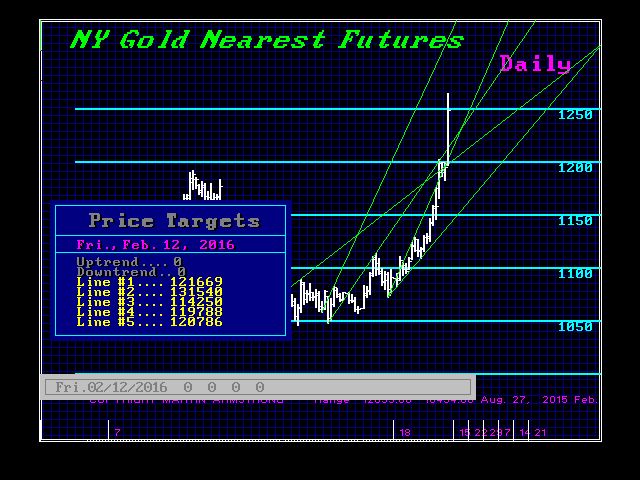 QUESTION: Mr. Armstrong. Are you calling this rally in gold a false move? What does it take to get you bullish? Will you ever be bullish?

ANSWER: When all markets line up and display that there is a trend in motion, which is then definitive, I will clearly state so. Gold has performed in a typical manner. When it closed ABOVE our year-end number of 1044, I stated it was not as weak as it appeared. It then started to elect ONLY the Bullish Reversals, not Bearish. There was a turning point coming up and it was moving higher into it. So what is the big deal? The Dow closed lower at year-end, warning of a correction, and the euro should rally back to the 113 to 116 level. Everything was in line for a reaction, not a major long-term change in trend. That would require political reform in Europe at the very least. Here is the technical analysis for today. It shows the extreme resistance at 1315, and underlying support at the 1216 and 1207 levels. It simply is what it is. This is not opinion nonsense.

Your problem is you see the world through the eyes of gold and ignore everything else. If you dared to be objective and study the past market movements, you would see that real SUSTAINABLE trends are coordinated. You have a reaction in the euro that I warned would unfold when we elected the Yearly Bearish Reversal at 116 for the close of 2015. I said we should go back to retest that number BEFORE moving lower.

The fundamentalists from Brussels have not changed. They will NEVER reform because they fear their agenda is wrong and so they are attempting to FORCE the economy and markets to comply to keep power. They are trying to cut a deal with Britain to prevent the referendum. All they EVER do is prevent any democratic process because they know the people would vote against them. This is an arrogant dictatorship that justifies itself by claiming they know better than the people do. How in the name of FREE MARKETS do you think this trend can continue in this direction — dollar down, gold up, Dow down — without some reality check? If you cannot see what they are doing then you deserve to lose everything you have.

Sure, they have dubbed this a rally and claim the people suddenly lost confidence in central banks. Look. They NEED to assign some explanation to every move. Using the excuse with a straight face PROVES they are not professional and either believe the nonsense they are fed or are so biased against central banks that they are blind themselves. Any REAL PROFESSIONAL knows the central banks cannot control the economy. Here you have MR. ESTABLISHMENT, the father of NEGATIVE INTEREST RATES, admitting they cannot predict the economy and have NEVER gotten it right, even once, since World War II. And people believe the Fed can control the economy? Who is the stupid fool? Those in charge? Or the idiots who think they are in charge? So why do you believe that suddenly people lost confidence in central bankers? They must be complete idiots to believe what the talking heads tell them anyhow. A fool is easily separated from the money. This is what they are good for. Those who understand need to make money from those willing to hand it over without a fight because they are incapable of advancing in life. They are the type who would keep putting their finger in a light socket expecting a different result. 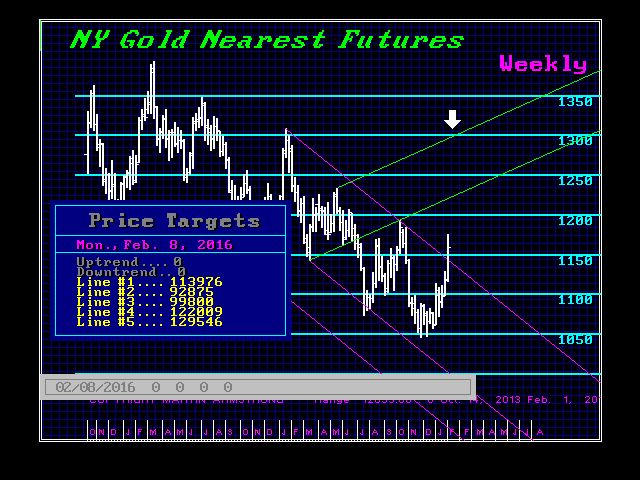 What is the big deal? This is just a simple, classic, Channel Move where you fill the gap between two channels. We have two Minor Weekly Bullish Reversals at 1237 and 1239. These will come into play today. If we can elect them today then some further upside becomes possible. Below we have the key Weekly Bullish at 1209. What you have accomplished is getting people offside. They will return to assuming it is a bull market but will fail to comprehend that they need everything to align before the real reversal unfolds. The risk of prolonging this trend into 2017 is very high. They are naturally prone to see only bull markets in gold, and expect the quantity of money theory to save their asses despite being dead wrong like Larry Summers. With one bounce, they forget how they were wrong and set themselves up for the next loss because they learned nothing. When confidence in GOVERNMENT collapses and people see Brussels as the open enemy of their freedom, then there will be NO BID for government paper and the trend will change.