Did Gold Survive the Depression? 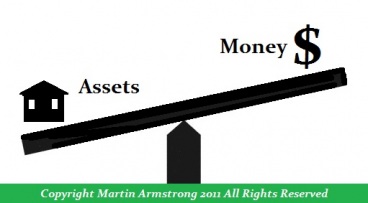 Some people totally confuse gold and money. During the Great Depression, we were on a gold standard. During a decline, ALL assets will decline against whatever is money, just as money declines during a boom. You need to separate MONEY from gold or you will never understand how the economy functions and you will buy gold when you should be selling. If you do not get this one right, forget it. You are not ready to invest.

If bronze or cattle were money, they would have risen against gold. It is MONEY vs. ASSETS — not gold. Today, gold is a commodity and it is tracking the commodity group as it is tracking silver. Gold moved opposite of silver between 1929 and 1932 only because it was then MONEY. So if you think a crash means that gold will rise, you are in for a very rude awakening.

You are doomed if you cling to the idea that gold will rise simply because stocks decline. Gold was DEVALUED in 1934 since gold was MONEY. What it could purchase for $20.67 then cost $35. The government confiscated gold and moved to a TWO-TIER monetary system with gold used exclusively for international settlements, not domestic. 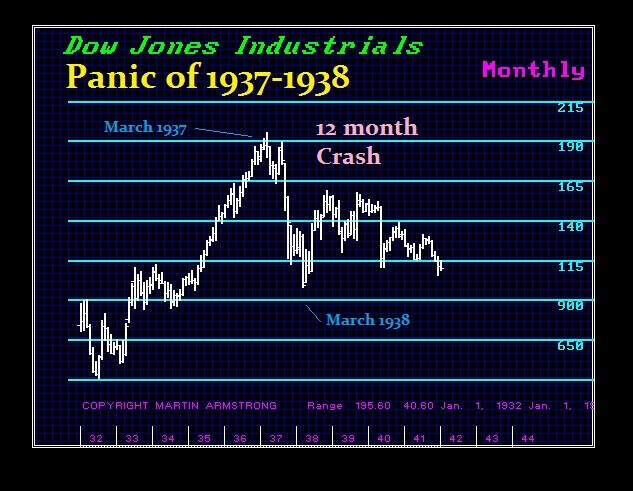 Gold rose in purchasing power between 1929 and 1932 simply because it was MONEY at that time. The gold promoters do not understand that gold is no longer money, and therefore it will not rise in purchasing power in the event of a crash. The promoters do not talk about the event where government confiscated gold. They focus on the fact that gold rose in value from $20.67 to $35 without explaining that everything rose between 1934 and 1937, and then fell with the crash of 1937 when MONEY rose in value. Devalue whatever is MONEY and all assets rise, be it real estate, stocks, or commodities. This is what took place even during the German hyperinflation. It is ASSETS against MONEY, regardless of what it might be at that moment in time. 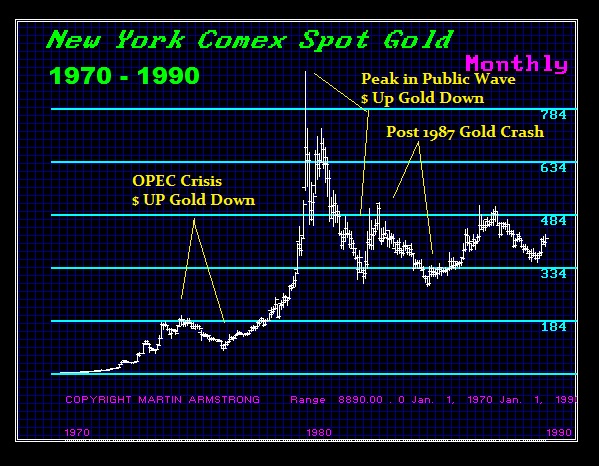 Today, gold will decline with commodities against MONEY, and then it will rise when people lose confidence in government after realizing that there is a Sovereign Debt Crisis. You better get this one right. Inflation soared during the OPEC crisis, but we ended up with cost-push inflation rather than demand; gold declined from 1974 into 1976 by about 50% and MONEY rose in purchasing power. All the classic nonsense from fiat to the end of the dollar was banter as gold fell 50%. If we look at how gold has performed when it is not MONEY, we can start to sort out the bullshit from reality.

Gold declined with each economic downturn from the OPEC crisis, the 1980 high, and the post 1987 crash. The Dow also rallied into 1980, as did silver, real estate, and just about every other commodity. The correlation between gold and all other assets was opposite of the Great Depression. 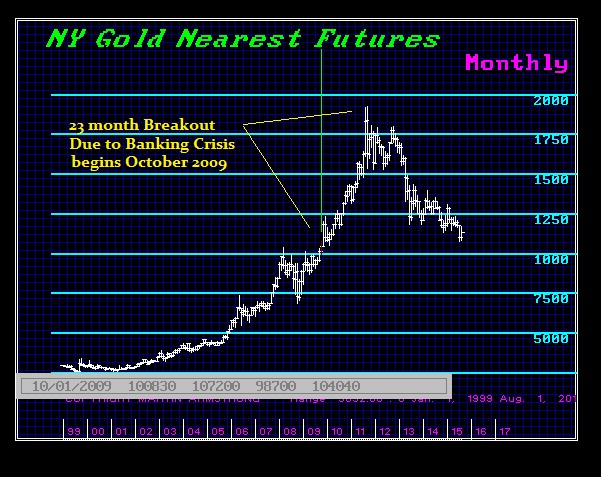 Gold broke out and rallied from our 2007 peak in the Economic Confidence Model, and stormed higher into the bottom of that wave in 2011. Here we saw gold perform as the “safe haven” but the gold promoters brainwashed everyone with their fiat nonsense. Here is one comment from a seriously brainwashed victim who can only see the world through the eyes of gold and fascism: “And BTW, 50 years from now, this will be seen as a dollar bubble. This can be detected only in relationship to metals and commodities, but this has been masked by paper to the degree that you simply refuse to look at it.” He does not understand the role of money and pines for Marxism where money is always the same value and the business cycle does not exist. People like this dream of perfect utopia where we are all mindless drones walking around in a perfect fog. They refuse to understand that MONEY is just a unit or account and a medium of exchange that everyone must agree on. You can tell the world that metals are money, but when you are starving and trying to convince someone who does not believe in your religion to give you food in exchange for metals — good luck.

MONEY is solely what another will accept because they know someone else will accept it from them. You cannot dictate to the world what you think should be money. This is not a bubble where metals will replace the dollar. This is a bubble in government. Regardless of what becomes MONEY after this event, the dollar will not be the reserve currency and has nothing to do with paper. It has to do with politics. As Milton Friedman said, “If you put government in charge of the desert, within a few years there would be a shortage of sand.” It really does not matter for you are focusing on the wrong piece in the puzzle.

Did gold rally because of fiat? No. Gold rallied because the banking system was collapsing. These people kept buying gold, swearing QE1-3 was inflationary, and lost all the way down because they failed to comprehend that this is not a battle against fiat.

Gold declined with every dollar rally when it was NOT MONEY and just a commodity, yet it rallied when there was a risk of banks failing — not QE1-3. This clearly illustrates what the “safe haven” really is. 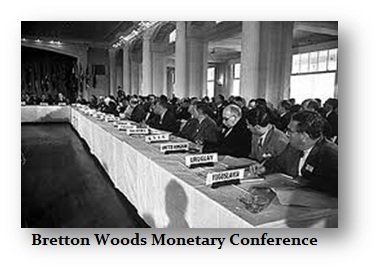 Those who preach of a return to the gold standard are one mark short of being declared insane. They live in the past and are incapable of understanding economic evolution. Bretton Woods failed because they fixed gold at $35 but increased the amount of issued dollars. A two-year-old could have figured out that such a system would collapse. ALL attempts at fixing money have failed, right down to the Swiss/euro peg. So what collapsed was the GOLD STANDARD, yet people WRONGLY think that returning to some gold standard will stop the volatility and create the perfect world of Marxism by eliminating the business cycle. The problem was not the gold standard: it was the politicians. Returning to a gold standard today will not solve anything without political reform. 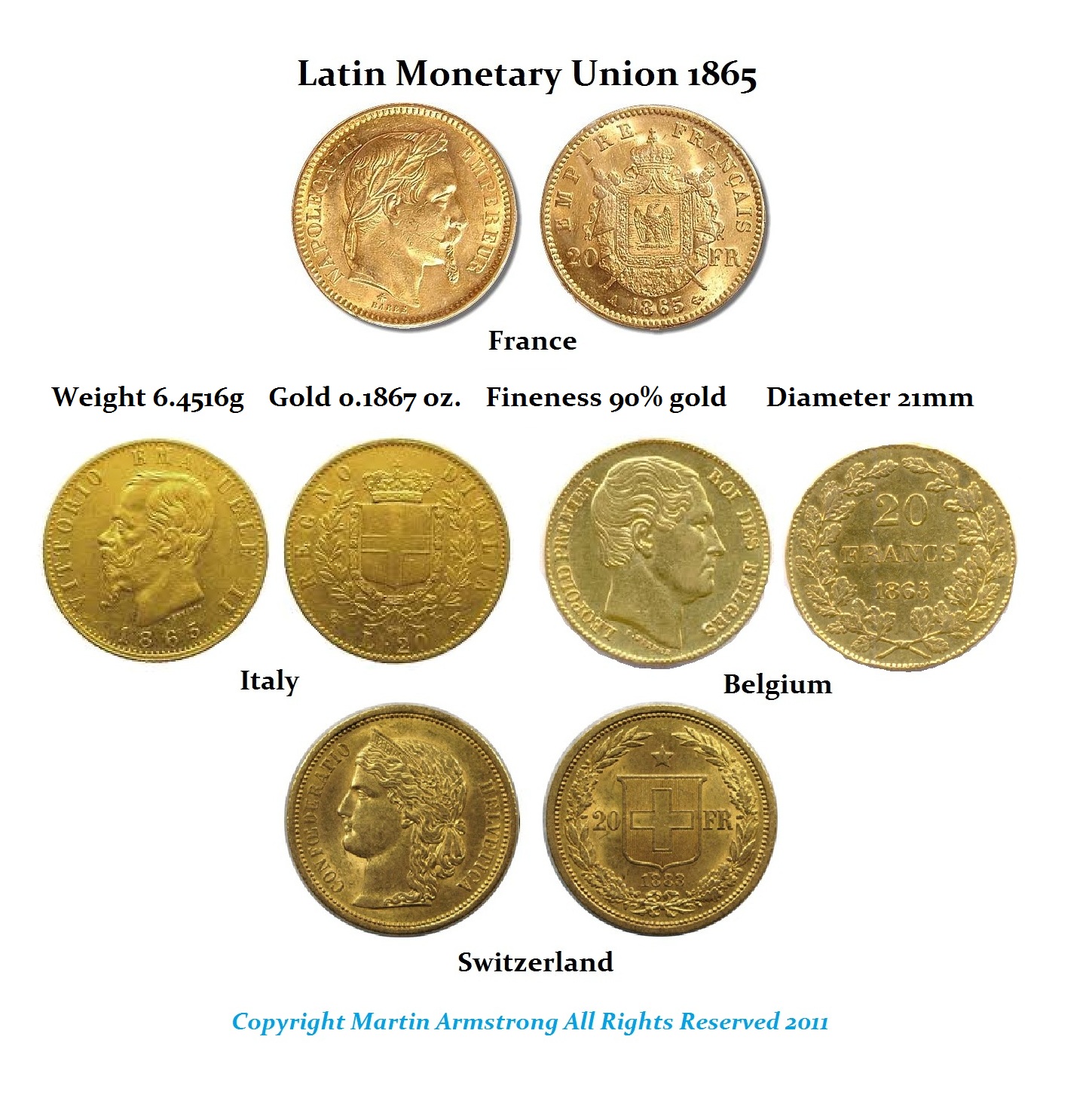 Gold cannot and has not prevented any financial crisis by creating a fixed standard. Bretton Woods was not the only gold standard to collapse. Historically, any attempt to create a “standard” is the same as creating a peg. We live in a free market and that means everything rises and falls with the business cycle. Absolutely NOTHING on a fixed standard can survive as everything fluctuates. Governments rise and fall because of the very same stupid mistakes.

During the 14th century, Florence had the very same type of two-tier system that was the foundation of Bretton Woods. Gold served for international settlement and silver was used domestically. Companies even had to keep two sets of books, and wages were paid in silver. The price of silver rose sharply against gold, leading to deflation and rising unemployment. The people rioted, stormed the palaces of the bankers, and set fire to them.

Gold WILL RISE along with stocks and commodities against whatever is money. The “safe have” will return ONLY when the public questions the survivability of banks and government — not fiat and inflation. If you disagree, then keep buying for the wrong reason just as the Japanese did for more than 20 years. This is the outcome we face, so stop the nonsense. Gold cannot possibly react as it did between 1929 and 1932 against everything else because it is not MONEY, nor the unit of account or the medium of exchange. So get over it. It will be time to buy gold for the right reason — not for fiat or this hatred of the dollar. That is like blaming your wife because you got into an accident driving to work. Get on point if you want to survive this game. This is the real world, not fiction. If you create a theory, it better work every time or it is just propaganda.

If you insist on unrealistic outcomes, as they say, a fool and his money are quickly parted. We are in the middle of a major crisis. ALL assets will rise against MONEY, provided we do not go all the way to a Mad Max event for then only food will have value.

Far too many people assume capital will only move to gold. That is not true for BIG MONEY cannot move to gold and never will. They cannot store it and it produces no income flow. Gold is for individuals, not BIG MONEY. The second misconception that one person wrote in is that “wealth cannot simply vanish; it would go somewhere, hoarding or otherwise.” This is simply not true. Money is the unit of account that measures wealth and that rises in falls in value. Even gold is being measured in dollars (the unit of account). Wealth is simply a valuation at an instant in time. When the stock market or any asset crashes, the valuation evaporates. It is NOT a zero sum game, as in futures, for there is no contract with only one side; there must always be two sides – long v short. Wealth in every other form is simply a valuation that evaporates — it does not transfer to someone else.

Gold rises ONLY when there is uncertainty about government or the banking industry. It will not keep pace with inflation and its fate is tied to the commodity sector. Some people will send hate mail over that simply because they WANT to believe something else.

Julius Caesar understood that and said that people believe only want they want to believe. He was correct. There is no convincing a Democrat he should be a Republican or vice versa. You will believe gold is money and shut out everything to the contrary, or you will have an open mind and comprehend that money is whatever the majority accept at that point in time.