Next week, China will begin its competition with London & New York and attempt to create the equivalent of the London gold fix but in Chinese yuan on April 19th. Of course the gold bugs are misrepresenting this as some dollar killer. Top Chinese banks, alongside Standard Chartered and ANZ, will be among 18 members to join a new yuan-denominated gold benchmark that signals China’s biggest step towards making the yuan convertible.  Of course, in London the banks have been fined for manipulating the closings to elect stops playing against their own clients. By creating a yuan based gold fix, this is a back-door to floating the yuan itself. It will allow for arbitrage in currency so you can go long or short gold in dollars and the opposite in yuan and you have then created a yuan futures contract.

For years, these people spinning stories that “paper gold” was evil, failed completely to comprehend how the market even functions. OPEC nations who could not earn interest religiously, bought gold and then sold it forward. They were not interested in gold; it was the means to earn interest without calling it interest. This is what gave gold the liquidity that other commodities did not have. The gold market was an interest play for decades enabling the OPEC state to circumvent their religious restrictions. Creating a yuan based gold fix is once again not about gold but about a test for floating the yuan. Sophisticated players will use this for the currency and China will monitor the trading as a test case for floating the currency. This is the small step forward. China has to float its currency or it will NEVER make it to the big leagues. Capital has to freely be able to move in and out without applying for permission to enter and leave.

So now these people spinning this story show their ignorance. They say “no dollars allowed”, as if this is some war that will destroy the dollar. China dollar reserves are over $3 trillion. Why would they try to make those reserves worthless? If they wanted to hurt the dollar, then convert the $3 trillion into something else. But what? Rubles? Gold is not easily transportable for international settlements among nations. Gold is such a tiny fraction of world capital flows (less than 1%), that converting all their reserves to gold would isolate China’s economy preventing it from trading with the rest of the world. These claims only reveal the lack of comprehension of how the economy even functions when these gold promoters yell this at the top of their lungs. 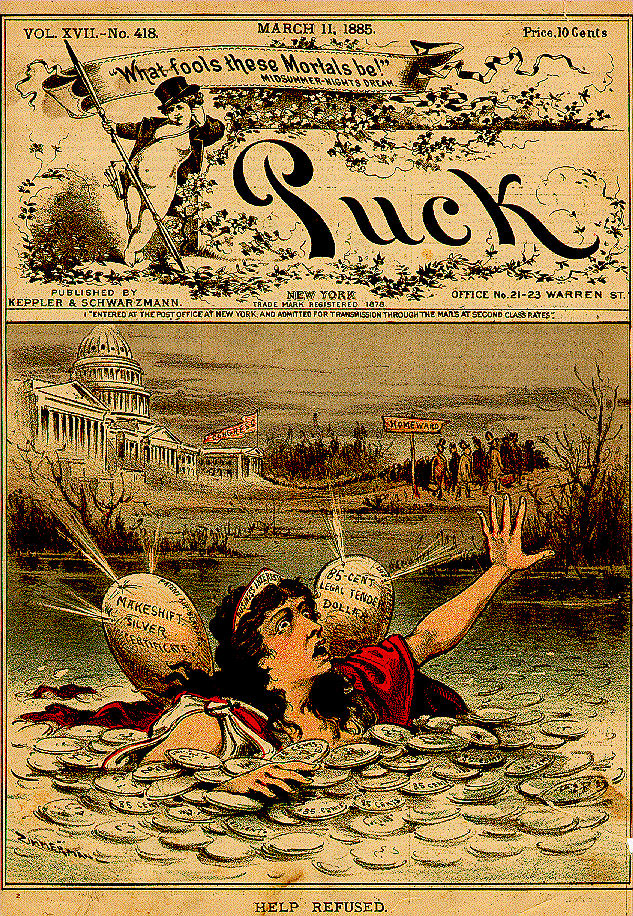 Those who are screaming gold will now go to $64,000 an ounce because this will some strange way make the yuan a gold backed currency, only demonstrate how ignorant they are when it comes to international finance. It was during the 19th century when the Silver Democrats tried to fix the silver at 16:1 relative to gold seriously over pricing it relative to where it traded in Europe. That resulted in silver being attracted to the USA and gold fleeing the country. This is why the USA entered a 26 year depression and ended up virtually bankrupt when J.P. Morgan had to arrange for a gold loan in 1896 to save the country. Here is the English magazine Puck showing America drowning in silver by their stupid attempt to overvalue silver relative to gold because the miners paid off the Democrats just as the bankers do today.

If China even dared to attempt to make gold some absurd price well above the world price, they would be bankrupted in a matter of weeks. Everyone would sell their gold to China and return with dollars and nobody would accept gold at some crazy price in payment for anything. All you would need to do is just wait for the collapse and buy back the gold at the world price. Any attempt by any government to FIX THE PRICE of gold far above the world price is precisely converting gold to FIAT defined as dictating the price disconnected from reality of the free market.

So anyone claiming gold will rise to some absurd number, just ask them; Will you buy it now at 10% or 5% of that number and how much do they want? I could easily deliver any quantity at 10% or 5% of such a price of $30,000, $50,000, $64,000, or $100,000. I will be glad to sell them an option at those prices. As the TV show use to be say: Let’s Make a Deal. The question really is; Do they honestly believe this BS? Or are they paid by people to try to sell dreams like swamp land in Florida and the miners did to convince the Democrats to buy silver at overvalued prices during the 19th century?