80% of Colombian Gold Production is Illegal 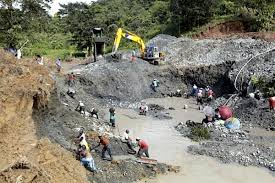 QUESTION: A friend of mine attended your WEC. He said he asked you at the cocktail party why gold was so cheap in South America. You said the drug cartels control the illegal gold mining in Columbia and that is now three times the size of the cocaine market. Did you really say that?

ANSWER: Yes I did. During the mid-’80s, Pablo Escobar and the Medellín Cartel controlled 90% of the multibillion-dollar global cocaine market. They said that cartel was pulling in $420 million per week, and Forbes said that Don Pablo was one of the “World’s 10 Wealthiest People” before he was 40. However, what people do not know is that there was also illegal gold mining operations in Colombia. When the price was testing the lows into 1999, gold was not the big focus of the cartels. Today with prices over $1,000, it’s estimated that the illegal gold trade is now some three times the size of the Colombian cocaine market. The two resources are inextricably linked and have always been so in Columbia. Illegal gold comes to the market and is laundered. It trades generall below spot. In fact, about 80% of the gold production of Columbia is all illegal gold.