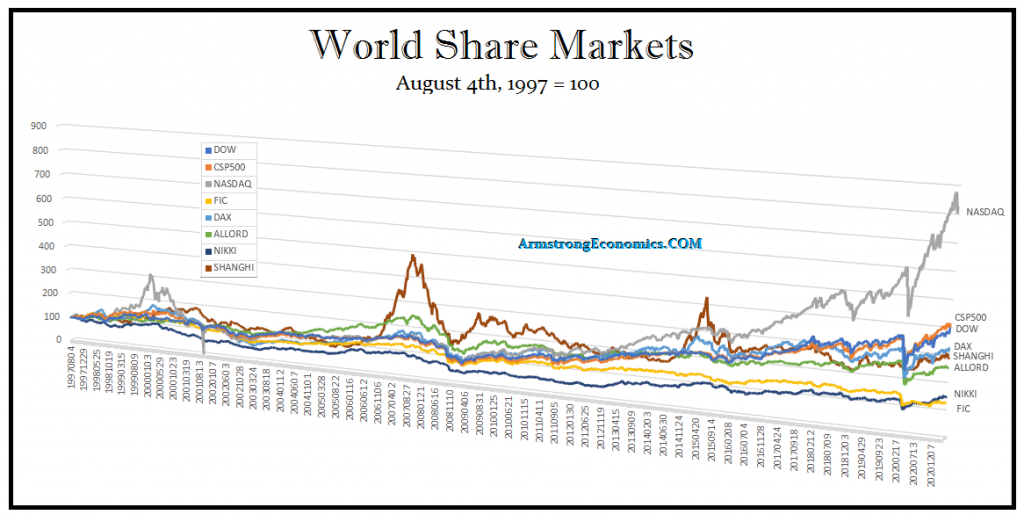 QUESTION: Mr. Armstrong, you always paint the US market as outperforming everything else. There are some who are calling this the new Weimar Republic and the market is destined to crash. Where does the US market rank in your opinion? With interest rates rising, do you think the market can continue to move higher?

Thank you for your insight

ANSWER: The US share market has been the best performing market consistently in nominal terms since 2016. The NASDAQ 2000 Dot.Com Bubble was the beginning of the shift in the economic structure that is now starting to materialize with online commerce exceeding even store sales starting in 2019. Here you can see a nominal comparison with 1997 = 100 and the three top performers were the Nasdaq, S&P500, and the Dow. The worst has been the FIC (London FTSE). You can see from 2016 onward, the bull market was set in motion by Trump’s policies.  The Fed kept raising rates all the way throughout the Trump Rally.

Note that during the Roaring ’20s, the Federal reserve also nearly doubled interest rates and the market still rallied substantially. So the answer is that bull markets always rally with rising interest rates for rates rise when the economy is expanding so people are willing to borrow. Rates drop like a stone when people are not interested in borrowing so all you get is economic stagnation.

Biden will most likely spend another $1 trillion on infrastructure. Then he will come out with a sharp tax increase saying we now have to pay for all this. So rates will probably jump next year and he will probably try to impose a rise in capital gains taxes retroactively. It is not likely that he will raise the income tax rates for 2021 because that would leave a lot of people with under-paying withholdings. So 2022 will probably be the Democratic dream come true as they seek to punish anyone who benefits from the expanding economy.