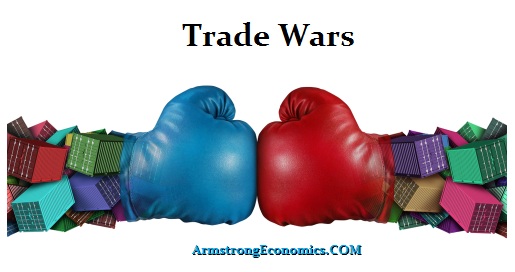 The interesting fact is that the majority of fund managers today have reduced their equity allocation to their lowest level since November 2016 according to Reuters. The reason for this is their focus of trade and their assumption that the Great Depression was caused by a PROTECTIONISM. According to yet a recent monthly report by Bank of America Merrill Lynch (BAML) where they conducted a survey of fund managers, the majority, some 60%, now fear a trade war. Clearly, the biggest concern out there is a trade war poses the greatest risk to the stock market. Another 19% fear excessively higher interest rates by the Federal Reserve. These two perceptions are the dominant reason we see consolidation.

However, our computer forecasted the consolidation for 2018 at the start of the year. This has sparked a number of emails asking how was it possible for the computer to forecast consolidation before the fundamentals? What I have noticed over the years in working with this model has been that trends will last ONLY for a specific amount of time. Like being cold all winter and suddenly the sun shines with Spring, we call it “Spring Fever” and everyone runs out at starts doing things when the weather changes. We respond similarly to cycles in markets. They will last only for so long and we get tired. It is NOT that specific fundamental that comes into play and causes the consolidation. Instead, the market trend shifts and people begin to look for explanations to explain it.

I have shown charts that demonstrate that rising interest rates are a market myth. The stock market has risen with higher rates and when the market crashes, demand-side economic means they lower rates trying to “stimulate”  demand under Keynesianism which has never worked. The ECB has kept rates so low for nearly 10 years and they have destroyed the European bond market as reduced Europe to an economy that is ranked even below China. And as far a trade is concerned, I have shown that Trade Tariffs were a response to the currency and the collapse in agriculture due to the invention of tractors and electricity during the early 20th century. Like the internet today is displacing jobs, electricity reduced the jobs in the manufacture and the combustion engine expanded to tractors reducing employment in agriculture from 40% of the civil workforce to 3% by 1980.

Consequently, the computer is forecasting the trend. People try to explain the change in trend and fit the fundamentals to try to explain what took place. I have written before that the book I had to read in school on the Great Crash by Gailbraith, never mention the Sovereign debt crisis of 1931 because he was a socialist who wanted to blame corporations EXCLUSIVELY. Others actually claimed that Hoover embraced the rise of Nazis in Germany because he wanted to trade and ignored Russia. Hitler came to power in 1933 and Hoover lost the election in 1932. They will even alter timelines to support a predetermined conclusion.

The trend changes due to cycles for we can only endure a trend for so long before we just want a change as we do in politics. The cycles are not altered by the fundamentals. Commentators fit the fundamentals to explain the cycle. The sharp decline in asset allocation to equities has not been met with a collapse in market prices. This is a very interesting development for the majority NEVER manages to sell the high.

« Russia Dumps US Bonds – Is it Politics or Yield?
World Trade & Who Needs the Flash Cards? »