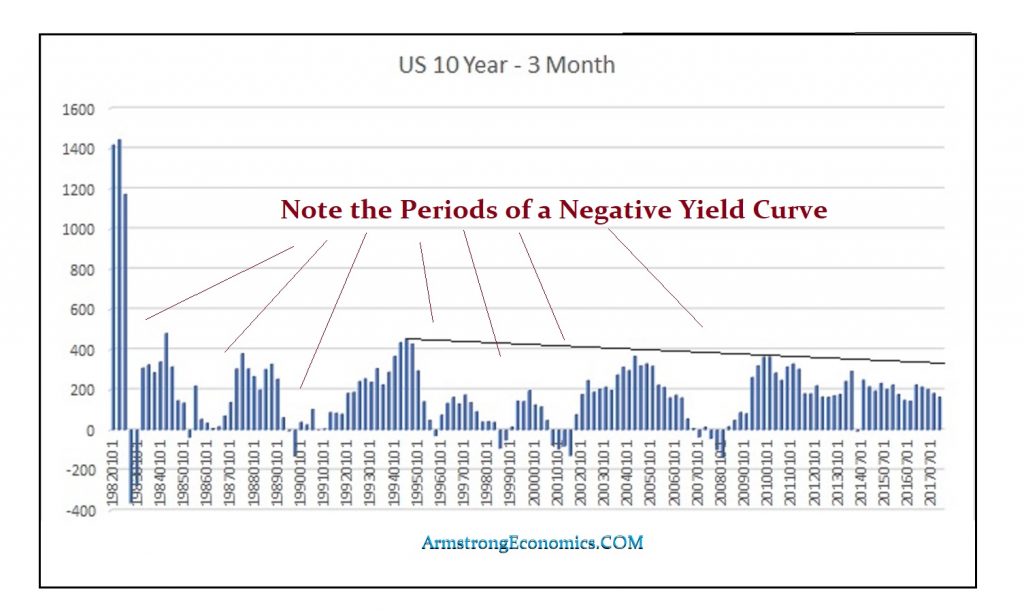 QUESTION: At the Institutional WEC session in 2016, you forecast that rates would rise but that the long-end would produce a positive yield for the next two years at least. Are we coming to an end of that forecast?

ANSWER: The new Institutional service is being expanded currently. Our hedging model positions have been added to the commentary. However, the consensus out there is that while the Fed is expected to raise rates 3 more times this year and 2 to 3 times next year, our models are projecting we are moving back toward a negative yield curve. That warns that the short-term rates can spike upward faster than expected. I did touch on this at the last WEC showing the gap in Reversals that appeared on the Discount Rate.

We will be adding the yield curve to the Institutional Levels. Those who have bought the long-term assuming that the short-term rate hikes will be modest for some time making a yield of about 2.65% attractive, may discover that the yield curve just may swing into a negative position again rather uncontrollably rather than intentionally.

We will be addressing this in more depth on the Institutional Blog.

On both the Professional Report for Individuals and for the Institutional Reports, Socrates writes a separate report for each time level in addition to a consolidated overview.

This is not the complete report. Timing has been omitted in this version.

THE SOCRATES INSTITUTIONAL MONTHLY COMMENTARY, DOW JONES INDUSTRIALS AS OF THE CLOSE OF  Fri. Jan. 19, 2018: Using our Monthly Hedging Model based on the Reversal System exclusively, we are currently long since  Fri. Jan.  1, 2016 when we reversed our hedge position in this market.

The last Reversal elected was a Monthly Bullish during April 2017. From a speculative perspective, basis the Reversal System, we are currently hypothetically long 14 positions at this particular moment on the Monthly level. Closing support lies at 2245613. Only a daily closing below this level will signal a pause in the Monthly trend. This market is in a Breakout mode but is easing up right now yet it is still trading up year over year about 23.6%.

This market has been making new highs which has been a series of successive advances. The last 3 highs have been progressively making higher highs implying we have a bullish run in motion for the past 25 months. The Channel Technical Resistance stands at 2515199 for the next session. A closing above that will signal a breakout to the upside once again.

Our models for this month’s open on the monthly level was 2563170 which we opened below coming in at 2480935. We needed an opening print above that number to signal this was still in a strong breakout position. We have exceeded that number so far during the trading this month and we are still above it on the latest closing basis suggesting the market is still rather strong. The projected extreme target breakout resistance for this month stands at 2650939.
Critical support still underlies this market at 2170962 and a break of that level on a monthly closing basis would warn of a decline ahead becomes possible.

Currently, we have not elected any Monthly Bearish Reversals from this new high. The immediate Monthly Bearish Reversal to watch lies at 2170962. A closing beneath this level will signal a temporary high is in place. Additionally, a closing beneath 2392190 would also imply a pause, technically speaking, in the uptrend for now. Technical projected resistance for tomorrow stands at 2543813. Only exceeding that level would imply a runaway breakout to the upside.

Looking at our Pivot Points, the market is trading above one indicating pivot implying that this market is in a positive position with support at 2442269 and resistance at 2563170 and 2593155 this month.

ENERGY MODELS
Our Monthly Energy Models are still in a bullish mode given the fact that the market closed higher.

RISK
Turning to the monthly time level, we must respect that there is a 7.55% risk on the upside, where we show a clear downside risk factor at 16%. From a risk perspective, resistance on a closing basis stands at 2804252 whereas the risk on the downside begins at 2170962.

The current overall tone on the Monthly level is very Bullish for right now electing four Monthly Bullish Reversals suggesting a strong trend move on this time level with the last Reversal being elected on April 2017.

The first key Monthly Bearish Reversal rests at 1601365. A bull market remains in play as long as that Reversal holds on a monthly closing basis. To confirm a mid-term change in trend to the downside, all four Monthly Bearish Reversals in this market would need to be elected meaning a monthly close beneath 2170962 is required. Our projected Bullish Reversals in this market are above beginning at 3373849. The Dow Jones Industrials is obviously in a full-blown bull market on the weekly to yearly levels of our model. Overall, the posture is quite bullish right now on the long-term perspective. Long-Term trend changes only when we elect monthly sell signals.