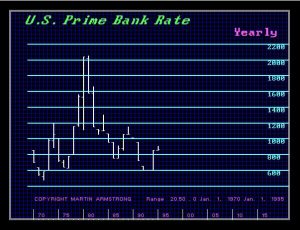 QUESTION: I am a bit confused. You have forecast that interest rates will rise but official rates will decline. Exactly how does this materialize?

ANSWER: People seem to look at just the official interest rates set by the central bank and assume what I am saying is wrong. They have to look at what is really going on in interest rates. We have witnessed the greatest gap between official rates and private rates in history. While deposit rates are virtually zero, car loans which are secured, are at about 4.5% in the United States (up to 9.5% outside the USA). The Bank of America, N.A. prime rate was 5.25% as of August 1st, 2019. 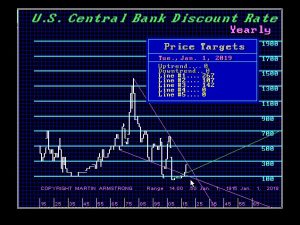 Official rates can be manipulated by the central bank for it can control the short-term rates, but not the long-term without instituting some form of capital controls. But they close the free markets in government bonds.

The spread on the private rates v official rates has doubled! I am nor forecasting the superficial trend in manipulated rates by central banks, but the real world rates in the private world. I have stated numerous times, the bankers have NOT passed on the lower interest rates to the people. The spreads have doubled – not declined nor did they even stay the same. If the spread was the same as it was in 1981, then the Prime Rate should be 4.2% instead of 5.25% and a secured car loan should be 3.4% instead of 4.5%.