Interest Rates Up & Bonds Up?

While the Fed may be raising rates, there is still a flight to quality underway that is giving a bid to US Treasury issues. Low Treasury yields may remain the norm even if the Federal Reserve raises rates again. At about 2.25%, 10-year yields have dropped to 2017 lows, even with the central bank signaling an imminent rate hike. Many still see the stock market crash and that also supplies a bit of an underlying bid right now. However, The Fed has also made it clear it will maintain a gradual approach to shrinking its massive bond portfolio thereby reversing the Quantitative Easing. We are in never-never-land where the Fed tightening will not yet have a direct impact upon the bonds on a one-for-one relationship.

Now look at the 2-year rate bottomed in September 2011 (high in price). Clearly, 2-year rates have been rising gradually for 6 years already. 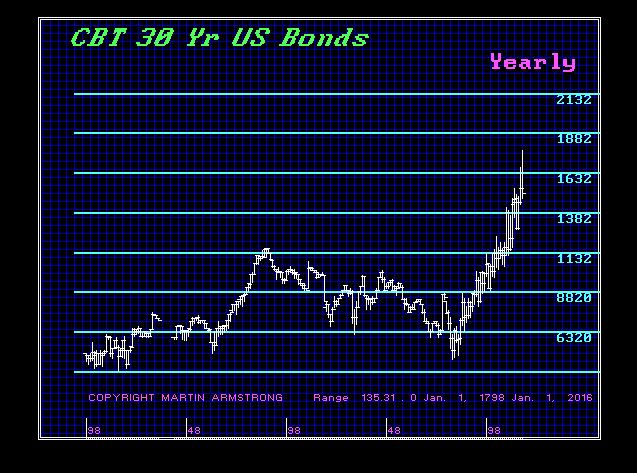 Now when we look at the 30-year on our Proprietary Perpetual 30 Year Contract back to 1798, we gain true perspective in how rates have performed in the long-term. We are clearly looking at a bond bubble, but the breaking point appears to be 2018. Because of the extreme flight to quality, we can still see a pop up in the 10-year before this is all over. This depends entirely upon the capital flows.