ANSWER: Many people want to reduce this to a logical explanation. It reminds me of when I testified before Congress at the House Ways & Means Committee. They had to put me on a panel with academics. I told them to make me last. The Committee was asking about changes in taxes and the impact upon currency. The academics said there should be no impact. When they came to me, I dealt with the truth. 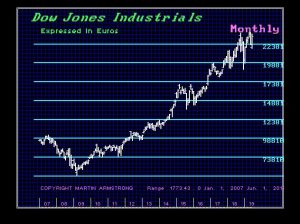 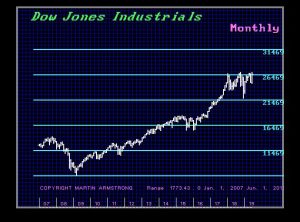 Currencies will rise and fall BECAUSE, first and foremost, this is the way international capital gets to vote on the CONFIDENCE in that political government. You see this in the spreads within the Eurozone such as buying Germany selling Italy or Greece for an example. The dollar has been rising of late BECAUSE the confidence in Europe has been collapsing. This becomes self-evident just plotting the Dow Jones Industrials in dollars v euro. If capital perceives a problem, it will flee from that region to another. The dollar rose during World War I and II, but it declined with the Korean War because the former was a reservoir of capital and the latter was not.