Why Are Dollar Bulls Almost Extinct? 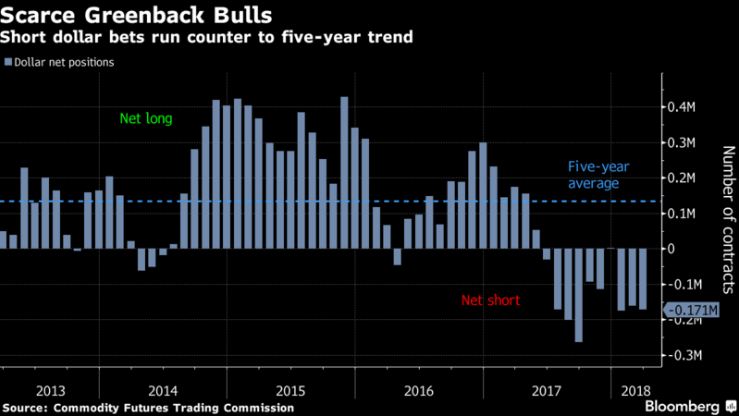 Bloomberg has reported that dollar bulls are nearly extinct down to just 2.3 %. The majority, which is always wrong, are all focused on the nonsense of the budget and the current account deficits. The record high for the dollar was 1985 when even the British pound fell to $1.03. So the Balance of Payments went negative from 1980 to 1986 and the dollar rose. OMG! How was that possible? When you actually correlate the Balance of Payments with the dollar, something amazing emerged. The dollar rises with the balance of payments going negative. Gee whiz! That is against all perpetual bear’s reasoning.

Perhaps this magical logic is just sophistry because they use their theory and don’t bother to check if it holds up over the course of time. I have been warning countless times that the Balance of Payments is by no means simply TRADE. It includes all flows of capital outward. That includes interest. The biggest trade deficit of the USA is not with Europe, but China, who just so happens to be the LARGEST investor in US government bonds. That means they collect the lion share of interest expenditures. The days of buying just pick umbrella for your cocktail are long gone.

Most people look at the Dollar Index for a guide as to being bullish or bearish. What they do not realize is how it is constructed is not really relevant. Currently, the index is calculated by taking the exchange rates of six major world currencies the Euro, Japanese yen, Canadian dollar, British pound, Swedish krona and Swiss franc. Then they apply a weight which is arbitrary. The Euro, for example, has a weight factor of 58%. The Japanese yen has a weight of about 14%. From a trade flow and capital flow perspective China is at the top of the list. The trade deficit with China (with includes interest expenditures that flow to China) stands at 123,676 billion compared to 343,078 billion for the entire European Union with Germany coming in at 49,363 billion. Japan now is still more in capital flows than Germany coming in at 67,117 billion. The weights that make up the Dollar Index are not truly reflected in either trade or capital flows. Furthermore, the index was created only in 1973. It shows the high in 1985 and the low in 2008, which really does reflect Europe rather than trade or even capital investment flows.