Is the Dollar Overvalued or Undervalued?

The latest claim running around is that the dollar is overvalued relevant to its trading partners, and it will decline as the economy recovers due to imports. You really have to wonder if these analysts are just working from home and have lost all sense of the world because they are locked down. In that forecast, they are ASSUMING that the world economy will recover as if nothing has taken place.

This is the typical analysis that simply focuses on domestic numbers and assumes that if you import more goods, then the dollar must decline. This theory is up there with thinking raising interest rates will be bearish for the economy and the stock market. Interestingly, both the economy and the stock market rallied as long as interest rates were RISING! 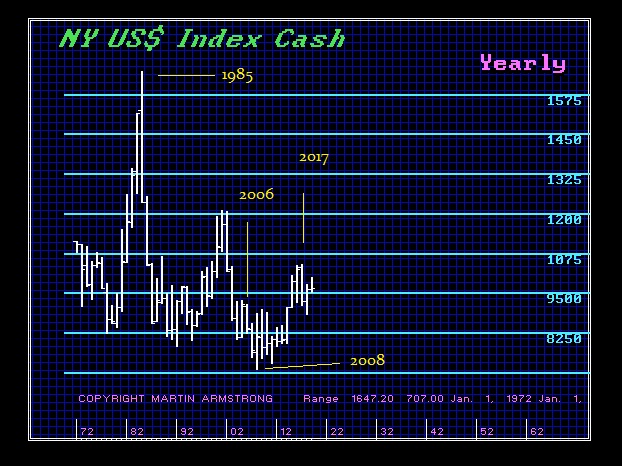 This is not a world that you can judge simply by looking at trade statistics. It is pure sophistry. In 2018, exports of goods and services from the United States made up about 12.22% of its gross domestic product (GDP), while US imports amounted to 15.33%. We have allocated trade according to the flag the company flies, and then you will see that the US has a trade surplus. Moreover, I assisted the Japanese on how to reduce their trade surplus buying gold in New York, taking delivery, and exporting it to London and selling it there. It does not matter what is exported; the statistics only look at dollars — not goods. This theory about trade to claim the dollar will decline is laughable.

All you have to do is real correlation analysis. Here is the US dollar Index, which was wrongly constructed based upon trade rather than capital flows, and the low in the trade deficit took place in 2006. It began to IMPROVE as the world economy turned down, and in 2008, we see an outside reversal with the dollar rising. The dollar peaked in 2001 on this index and that was the crash in the market from the 2000 peak in the Dot.com Bubble.

The true trends that reveal the future are based upon capital flows. The dollar rallied and peaked in 1985 during that recession, but on the US stock market, the Dow performed a rare outside reversal to the upside in 1982, which began the explosion from 1,000 to 6,000. That also attracted capital flows for investment. The dollar peaked in 2001 during that recession as capital contracted.