The Gold Standard Fell As All Currency Pegs Do 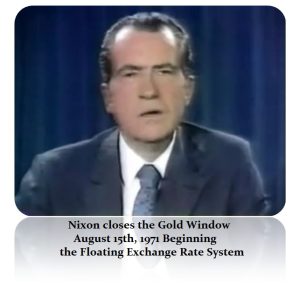 COMMENT: Dear Marty,
In your recent blog about BREXIT, and. “Remainers acting in self-interest”, you produced an ONS graph showing UK’s growth rates before and after joining the EU (previously known as the Common Market), and concluded: “Britain has NEVER received a fair deal since joining the EU”.
Surely you have overlooked a groundbreaking event in the early 1970s, which has shaped economic cycles and led us to where we are today: Nixon’s fateful decision to ditch the Gold Standard?
Regards,
Raj

ANSWER: No, the two are not connected. Bretton Woods collapsed on August 15th, 1971. The peak in Britain’s GDP came in 1973. Nixon closing the gold window was by no means discretionary. To the contrary, there was no alternative.

The gold standard failed as it always does. You simply CANNOT FIX the value of money. It was stupid to create Bretton Woods with a fixed exchange rate. Once again, people argue currency manipulation for trade when the free markets control the value of currencies today. China has tried to support the yuan, not suppress it for trade benefits. 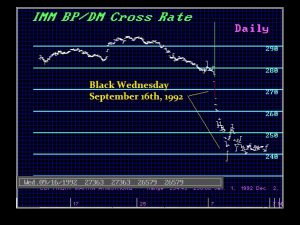 The government cannot fix the money at some arbitrary value and then spend whatever they want, thereby increasing the supply of the currency while keeping the value to gold fixed. A grade-school child could figure out the inevitable collapse. I was called into the ERM Crisis for they overthrew Maggie Thatcher to try to take the pound into the coming Euro. They fixed the pound at absurd levels and they created Black Wednesday. I was called because again I warned this would fail but only Maggie would listen. They tried to fix the pound in the European Exchange Rate Mechanism and it blew up in their face. 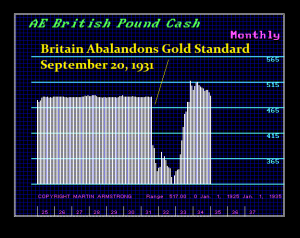 Currency pegs all face the same fate. The British attempt to fix the pound after World War I was absurd. On September 20, 1931, Britain abandoned the gold standard. It was an event that has scarred political memories for two generations, for the financial crisis which preceded it led to the fall of the minority Labour administration and the decision by its leader, Ramsay MacDonald, to form the National Government with the help of the Conservatives. Electoral catastrophe followed for Labour, and many within the party never forgave MacDonald. Labour’s suspicion of the international banking community, which played a part in the government’s fall, dates from this experience, too.

The Swiss tried to peg the currency against the euro and that blew up. There is no exception in history. The fate of pegs is always the same because there is this thing we call the business cycle.