The Rush to the Euro with QE Ending?

QUESTION: Mr. Armstrong; You have been calling for the dollar to decline against the Euro and it should test the 125 level. Do you see the dollar continuing to decline which then breaks the back of Europe with deflation and then everything flips? 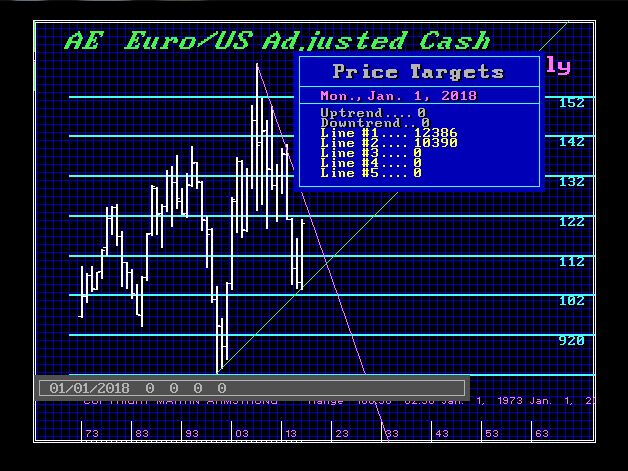 ANSWER: Last year was an outside reversal to the upside meaning it made a new low since 2008 reaching 10341 and then closed above the 2016 high. That confirmed we should see a lower dollar in 2018 and our target in the 125 level has been slow in coming. There is no reversal of fortune without a closing above 140. Our minimum target was 12570 with the next forming at 12890. Thereafter, we reach the major resistance in the 135-140 zone. The technical resistance begins just shy of 124.

The Euro is rallying because the ECB is seen to be abandoning its QE program which has failed. The rush to the Euro is the assumption that with higher rates, at last money will come home. We still have a minefield of political issues. Creditors are dissatisfied with the lack of austerity in Greece as well as Italy. Our critical turning point remains March 2018.

The crisis yet to unfold is will there be buyers of European debt to take up what the ECB has been buying? This is part of our forecast with rising rates and the more they rise the worse the budget will get. There is just no way out of this crisis without serious reform. So people rushing into the Euro thinking this is a turn-around long-term for the dollar will be shown that the old saying fools rush in where wise men never go will be carved in stone.