World Bank: The Poor Will Suffer From Carbon Taxes 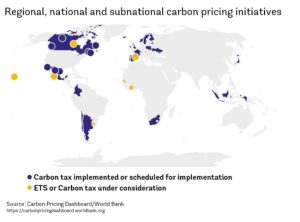 The World Economic Forum is praising Denmark for implementing the world’s strictest carbon tax laws. Companies will soon be forced to pay $159 for every tonne of CO2 emitted, marking an additional $53 per tonne. The government claims this will cut CO2 levels by 3.7 million tonnes in just one year.

“This incentivizes companies to clean up for themselves,” the WEF reported. In the midst of an extreme energy crisis, punishing energy suppliers will undoubtedly backfire. These costs will be passed along to the already struggling consumer. Even the World Bank admitted that the poor will suffer from the carbon tax.

The World Bank stated on its blog:

Furthermore, they admitted that the carbon tax “aims to restructure economies by raising the cost of a critical resource – the juice that makes it run.” Precisely. We NEED fossil fuels right now, there is no other viable alternative available to provide energy to the world. Since nations have succumbed to the climate change agenda, they have lost their energy-independent status. Europe shot itself in the foot by eliminating any diplomatic relations with their number one supplier of gas for a country that they did not acknowledge prior to February 2022.

Other nations with the ability will drill and sell oil to those under WEF leadership at a premium. India is already buying Russian oil at a discount, refining it, and selling it to the US for a premium. This is more than just bad business as it is a clear attempt to cut off a “critical resource” to “restructure economies” as seen fit by the WEF.