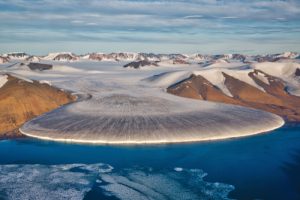 In July 2021, Greenland ceased issuing licenses for oil and gas exploration. Now, Greenland has announced that the ban will be permanent. The government cited climate change as their main concern, and Greenpeace cheered their decision. The announcement would leave one to believe that Greenland actually had a good amount of oil reserves. Major oil companies such as ExxonMobil, Chevron, Shell, and Eni have been scouring Greenland since the 1970s for oil unsuccessfully.

Some may recall that in April 2020, former President Trump actually attempted to buy the sovereign territory, but not for natural resources. The Trump Administration wanted Greenland as a strategic military location to repel China and Russia from dominating the Arctic region. This angered Danish authorities and the US handed over $12.1 million for “sustainable economic development,” meaning they needed to secure a consulate on the world’s largest island.

Four-fifths of Greenland (836,000 square miles) is covered by the only permanent ice sheet outside of Antarctica. Sure, there are likely oil and mineral recourses beneath the ice, but after 50 years of exploration, Greenland’s announcement to ban further exploration seems lackluster.

“The future does not lie in oil. The future belongs to renewable energy, and in that respect, we have much more to gain,” a spokesman noted. Keyword: future! There is no current sustainable energy to replace fossil fuels at this point in history. That technology does not exist on a wide enough scale to power the world. So again, this announcement sounds like another nation bowing to the Build Back Better agenda to show the world that they are adhering.