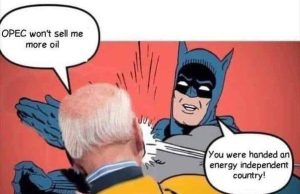 Numerous European nations have already stated that energy would be rationed during the winter. The Northeast area of America will now be required to ration energy as well. Biden released 15 million barrels from the emergency reserves to aid the Democrats in the 2022 US midterm elections. He did not provide any oil to the Northeast home heating oil reserve that is currently experiencing a shortage.

Bloomberg reported that some wholesalers in Connecticut have already put a limit on the amount of available fuel and must ration their customers’ consumption. Former Maine Gov. Paul LePage is urging the current Democratic Gov. Janet Mills to beg Washington for assistance before it is too late.

“Today, just about an hour ago, we got information from a local oil dealer… oil right now, tonight at five o’clock, is $5.69. Kerosene is $6.69 a gallon. This is what we’re facing right now,” LePage said. Republican state rep nominee Mike Grant called the current issue a crisis. “As we enter home heating oil season, diesel prices are nearing $6 per gallon. This is a nothing short of a crisis for CT families. To make things worse, in 72 days, the CT Dems will begin taxing home heating fuel trucks for delivering your oil to you. More inflationary pressure!” he tweeted.

That’s right, the Democrats want to implement additional taxes on fuel amid an energy crisis. Some families will simply be unable to heat their homes this winter. People will be forced to choose between warming their homes or filling their refrigerators. Our emergency reserves are being used as a voting bargaining chip instead of for their intended purpose. Americans will soon see the full effect of the energy crisis AFTER the midterm elections when these ignored issues come to a head.