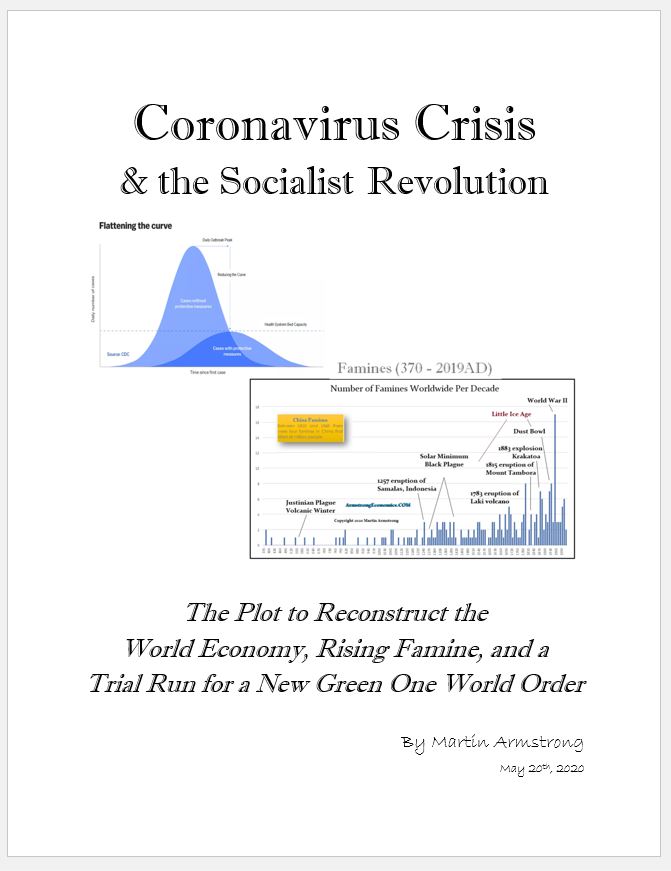 I do not speculate on whether the current situation has been orchestrated intentionally or not. This to me sounds more like the case for 9/11 you often described. They knew in advance that a “pandemic” could come any time, and they took advantage of the very first virus spreading around as the perfect excuse to put things into motion.

Indeed, a coordinated action to push the reset button on the world economy and hence a global default on debts seems a plausible plan of action by the ruling classes. You restart with an operating system upgrade, clean the air, create mass surveillance with the excuse of an invisible threat, and impose a new social contract. Authoritarian playbook 101.

My question however is, how would in practice a global coordinated debt default unfold? Could you elaborate in some detailed causes and consequences, please.

ANSWER: It has been coordinated and this virus is by no means something that is so lethal. There are many who argue it was the result of experimentation in a laboratory that got out rather than a biological weapon. Others are speculating that it was created by a funded Gates operation and Fauci is responsible. The Chinese fight back by blaming the US military. I seriously question that the USA would have done that because there was nothing to gain. For me, just look at who benefits and follow the money.

Those are things I care not to get involved it. I am more concerned about the impact rather than the origin at this time. From that perspective, I have finished a report which will be posted for downloads this weekend. It is not the “rich” who are looking to crash the debt — it is government who will default on the rich.