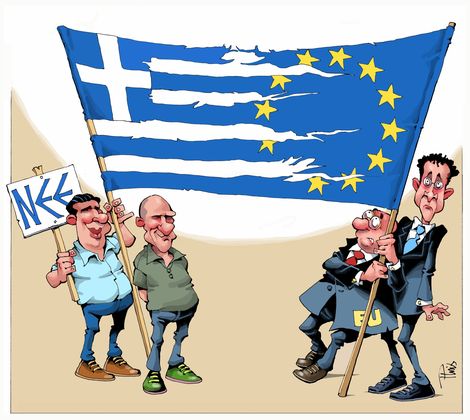 The EU is simply self-destructive. There was no way to merge all these economies together without debt consolidation from the outset. The euro will collapse and break apart. Brussels is just brain-dead for they cannot force austerity upon the rest of Europe with the upcoming economic decline. Talks at an EU Summit with Greece collapsed.

Yet in a sign that a dramatic Greek exit (Grexit) from the euro would not happen, on Sunday a full summit of the European Union’s 28 leaders was cancelled. Instead, the Euroland’s 19 leaders, including Greek Prime Minister, Alexis Tsipras, will meet Sunday afternoon to assess the outcome of the finance ministers meeting and plot a further way ahead. The real question is WHY for less than a week after they triumphantly gave international creditors a bloody nose by rejecting a harsh austerity plan, angry and bewildered Greeks are left wondering why they now find themselves swallowing an even worse deal under the leadership of Alexis Tsipras?

There is nobody in charge here but lawyers. There is no one with any real world experience in the world economy that has a clue about what they are trying to sustain by sheer force.