Do Vaccinated Pregnant Women in Their First or Second Trimester have an 81.8% Chance of Miscarriage? 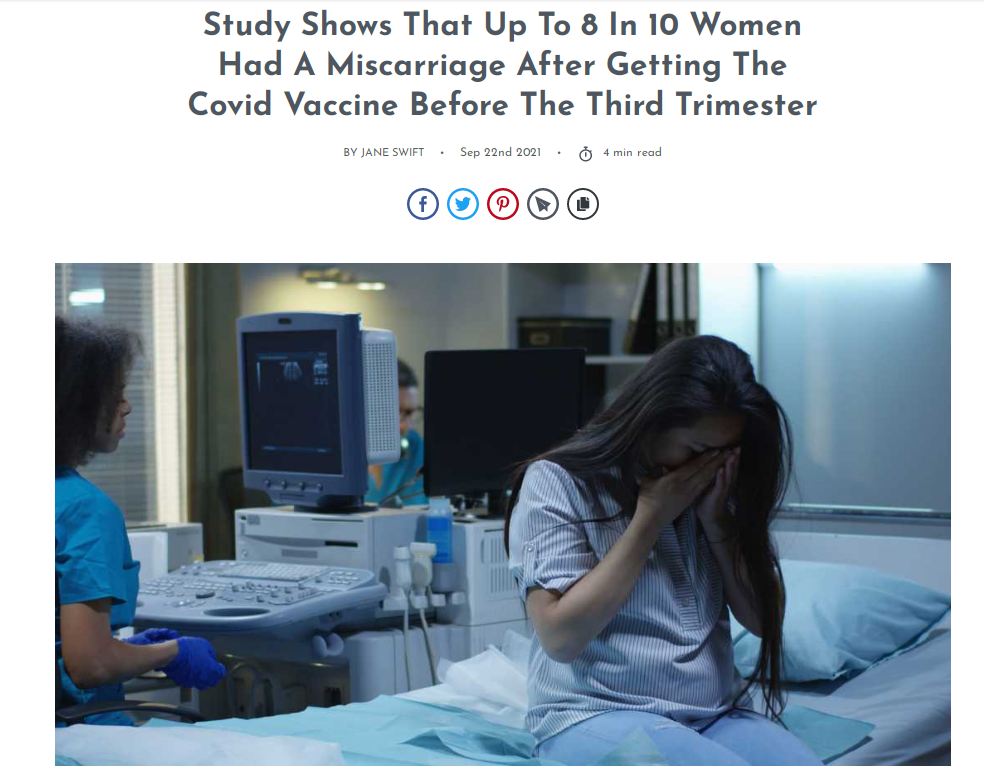 You have to wonder why universities are suddenly investigating if the vaccines are causing abortions. The government appears to have been playing around with the numbers to hide the fact that there may be a problem with COVID vaccines causing spontaneous abortions. I have reported that one staff member, who is 25, will not get vaccinated because her vaccinated friends have experienced completely distorted menstrual cycles. The Babylon Bee (yes, a known satirical site) wrote a piece where medical schools revised the Hippocratic Oath to exclude the unvaccinated “to set an example for others.” I have received some comments that this is not so far off. Who knows.

The revised study from the New England Journal of Medicine states:

“Among 827 registry participants who reported a completed pregnancy, 104 experienced spontaneous abortions and 1 had a stillbirth… [rather than] a completed pregnancy, the pregnancy resulted in a spontaneous abortion in 104 (12.6%) and in stillbirth in 1 (0.1%); these percentages are well within the range expected as an outcome for this age group of persons whose other underlying medical conditions are unknown.”

Claiming that spontaneous abortions are normal is clearly suspicious. These miscarriages, by definition, occur before the 20-week gestation mark. The Mayo Clinic states:

“Miscarriage is the spontaneous loss of a pregnancy before the 20th week. About 10 to 20 percent of known pregnancies end in miscarriage. But the actual number is likely higher because many miscarriages occur so early in pregnancy that a woman doesn’t realize she’s pregnant.”

They have manipulated the numbers like everything else. This means that all 700 women who received the vaccine in the third trimester must be excluded from the calculation because they were already past being able to have a technical miscarriage. Therefore, looking closely at the study suggests that 104 out of 127 women experienced a miscarriage since they were under the 20-week definition. This obviously means the miscarriage rate of women who received the vaccine in the first or second trimester is actually 81.8% or 8 out of 10 women. This is far beyond the normal 12.6% range.

This leads us to ask once again: What is the truth here? I can attest from personal knowledge that even taking aspirin during the first trimester can cause birth defects!

« Do the Vaccines Impact Fertility?
Earl’s Restaurant in Vancouver Has Unvaccinated Arrested »