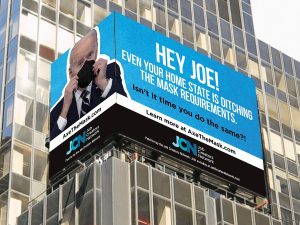 A giant billboard has been placed in Times Square, asking Joe Biden to repeal the mask mandates. “Hey Joe! Even your home state is ditching the mask requirements. Isn’t it time you do the same?!” the billboard reads. The Job Creators Network (JCN) erected the ad and has been a large opponent of mandates. They have been very effective in making progress. The website states:

The Job Creation Network sued the Biden Administration for forcing people out of the workforce by requiring vaccine mandates. “The federal government doesn’t have the power to require small businesses to carry out its de facto national vaccine mandate. JCN’s lawsuit intends to block this federal power grab,” the group said. A judge agreed that Biden’s mandate was an abuse of power and repealed the Executive Order – resistance is not futile.

« Vaccines Contributing to the Collapse in Confidence of Government
Draghi: The Unvaccinated Are Not Part of Our Society »