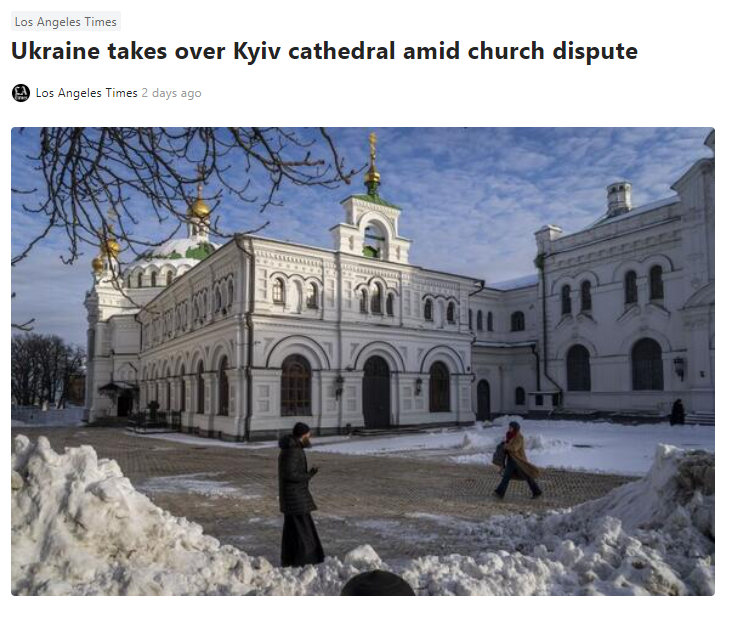 COMMENT: Marty, I just read that Ukraine seized control of a Russian Orthodox Church that has been there for a century. You were correct. Zelensky has also made this a holy war. The Ukrainian people should rise up against this guy. He is killing them all for hatred.

REPLY. I have had staff on both sides in Ukraine. I have been well aware of the hatred and animosity that I do not see will ever be resolved. This is like the battle between the Shite v Sunni in Islam or the Catholic v Protestants in Christianity. Zelensky has shut down free speech and has seized control of the main cathedral and monastery in Kyiv which has always been Russian. It has always been affiliated with the Russian Orthodox patriarchate and allowed its Ukrainian rival group to use it for Orthodox Christmas services. The cathedral is the oldest Orthodox church in Kharkiv. This was constructed in the Baroque style at the expense of the community in 1771-1777  long before Ukraine was even an idea. The old church was destroyed and dated from the middle of the 17th century.

This is no different from the French King seizing the Vatican and moving it to France at Avignon. Zelensky outright hates Russians and has even called on NATO to NUKE Moscow in a sneak attack. Zelensky said a nuclear attack on Russia is “needed so that [the Russians] know what awaits them if they use nuclear weapons” during an event with the Australian think tank the Lowy Institute. “Not the other way around, waiting for Russia’s nuclear strikes and then saying, ‘Oh, you’ve done that, then get this.’”

This is the guy we are to send any missiles to? He is consumed with hatred and is the most dangerous head of state perhaps surpassing even Stalin and Kruschev.

« An Independent Journalist on the Ground in Ukraine
Kissinger Sells Out on Ukraine? »