The Spanish Government is clearly fascist and cannot escape that stigma. The day before the appearance of Carles Puigdemont in front of the regional parliament of Catalonia, the Madrid government has come out and warned of serious bodily threats that one would expect only from a dictator – not an elected democratic government. Prime Minister Mariano Rajoy’s spokesperson, Pablo Casado, came out and rejected all calls for any dialogue in Madrid with Catalonia. “We will not give in, and there is nothing to negotiate with the putschists,” said Casado.

Casados boldly stated publicly: “Anyone who declares it (independence) will end up like the one who declared it 83 years ago.” In Spanish history back in 1934, Lluís Companys i Jover (1882-1940) was the head of  Catalonia’s government, which proclaimed itself as an independent state back then as well. He and the entire regional government were arrested after a few hours by the Spanish army. He was exiled to France in 1939 but would not leave because his son was seriously ill. In 1940, Companys was captured and was handed over by the Nazi Gestapo to the dictator Francisco Franco (1939-1975). He was executed in Barcelona at 6:30 a.m. on October 15, 1940 for seeking Catalonian Independence. Lluís  refused to wear a blindfold, and was taken before a firing squad of Civil Guards barefoot. When they fired, his last words were ‘Per Catalunya!’ (For Catalonia!). Keep in mind that people were imprisoned for even speaking Catalonia’s language. 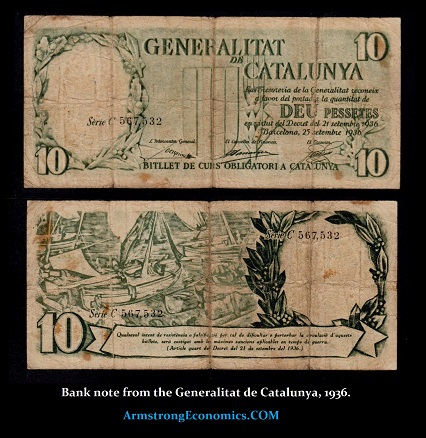 More than 90% of voters in Catalonia voted for a separation from Spain BECAUSE of Rajoy’s dictatorial attitude. Here is a banknote from the last independence movement from our collection of the World Monetary System. The opponents of Independence, who had boycotted the vote by a majority, went to the streets of Barcelona on Sunday to protest against the separation. As the EU declines in an economic death spiral, things are only going to get worse over the next two years and Rajoy will see the Spanish outside of Catalonia rise up against his dictatorial-like reign.

For the Rajoy government to threaten killing any public official who again declares independence is just beyond belief. For the EU to standby and say nothing is even more of a disgrace. The federalization of Europe to Brussels now supersede human rights. It’s all about the politicians and power now. 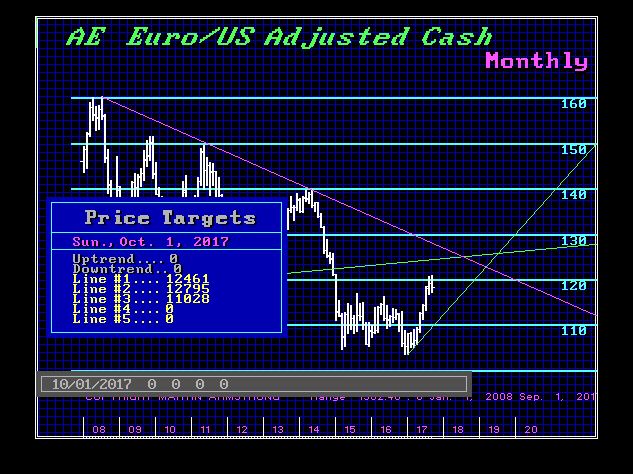 The Euro has still been unable to reach the first key area of important resistance standing at the 125 area. We still see November as the critical turning point and a Panic Cycle as well. There is no doubt that Spain will impact the Euro and indeed may help to push the Italians to also vote to separate as they witness the fascist-style response of the Rajoy government. Taking to key institutions in Europe, what many now want to see is a resignation from Rajoy. He is doing tremendous damage to the image of Europe as a whole.

Meanwhile, there appears to be a run on the European Central Bank (ECB) itself. Banks have tendered this week calling in a total of 21.3 billion euros, which is the highest amount since March. Typically, this runs between 3 to 4 billion Euros. Many see this as rising concerns in Italy of a full blown banking crisis set in motion by the new ECB guidelines. Banks will now have to gradually cover all loans that are now classified as risky. In the case of new unsecured problem loans, 100% coverage is to be achieved after two years, and for new collateralized loans no later than seven years.

Others see the run being sparked also by Rajoy. The threats of violence against Catalonia’s leaders brings back the days of Franco and Nazi actions. This is just not going down very well behind the curtain.