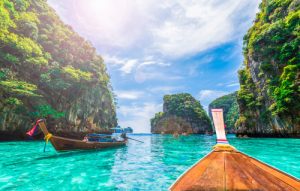 The dollar decline against the Thai Baht is starting to impact both a trading perspective as well as economic. Thailand’s central bank is worried about the decline in the greenback against baht. They fear that the U.S. keeps a watchful eye out for signs of unfair currency policies. Indeed, the bureaucrats are clueless with respect to currency trends and prefer to chalk it up to the political manipulation rather than free market movement. Bank of Thailand officials intensified verbal intervention trying to create resistance in the baht as Senior Director Don Nakornthab announcing he was “worried” last week about the monetary authority and how they were thinking about how the dollar can be supported. He also came out and spoke of a possible interest-rate cut.

The baht has climbed 8.3% against the dollar in the past year and has been the best performer globally, It’s viewed as a safe haven given Thailand’s history of current-account surpluses and near-record foreign reserves. However, Thailand has also become a destination for many people seeking shelter from the West. Those seeking to retire have found a safe place to hide and the capital inflows have been rather strong. Thailand has also been regarded as a safe-haven from many within Asia as well, and that includes Japanese.