Should we Cheer for Putin to Lose? 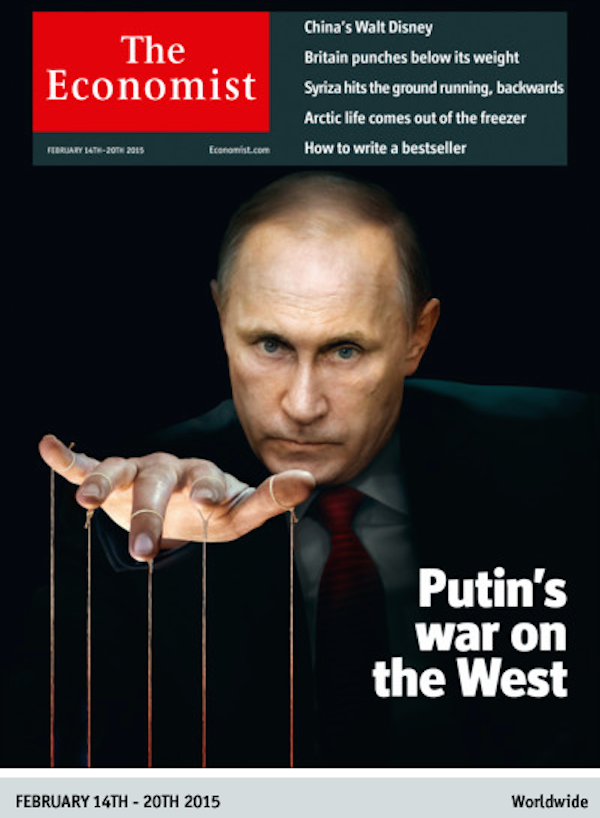 While the Neocon strategy of DEMONIZING an adversary as they have done to Putin, the very same strategy was used to get people to absolutely hate Donald Trump. The more someone hates Trump still, the more susceptible they are to simple techniques of mind manipulation. This has led many to cheer for the Ukrainians to defeat Russians and we have the White House calling Putin a War Criminal when you could say the same thing about the US leaders that started the endless saga of wars on false pretenses or took out civilians with drones when they wrongly thought they were terrorists.

The White House appears to be under the influence of the Neocons who just always advocate war. Make no mistake about it, these Neocons are not confined to just the Democrats or Republicans. This has been a problem throughout history. Neocons share a love for war and the hatred of everyone they perceive to be an enemy regardless of being Republican or Democrat. They will pretend to be in one party or the other to push their own agenda of war.

It’s tempting to think that Putin will suffer a defeat and democracy could revive in Russia. That is up there with Santa Claus. A more likely scenario is total world chaos. Russia is also comprised of Muslims who number about 14 million or roughly 10% of the total population. Then there are different cultures and you will see internal chaos and separatist movements armed with nukes. Neocon through the same nonsense about removing Saddam. They failed to understand he kept the religious zealots in check so we then ended up with ISIS lobbing off the heads of people on TV.

Putin is not a fool and he is actually honoring his word. He is not trying to conquer Ukraine. His column of tanks had stopped as a show of force and intimidation just sitting there. The Ukrainians did not attack them because they did not attack the Ukrainians. Putin has not ordered just total annihilation. The US strategy is we go in and flatten everything targeting water and power grid and then hand them $1 trillion to rebuild it all. Putin took the power station but did not turn off the power. The West portrays this as Putin is stalled and the Ukrainians could defeat the Russians. But this seems to be propaganda all designed to wear down the moral of the Russian troops and sway public opinion for Ukraine.

While the press also portrays that Putin’s nation has now been subjected to an isolation greater than any nation has ever experienced by any major power in history, it was US sanctions to cut off the fuel to Japan that caused them to attack Pearl Harbor. There were later Congressional investigations into FDR and did he deliberately try to create a situation to get the USA into World War II. Congress simply said the allegations were inconclusive. They neither exonerated him nor condemned him. 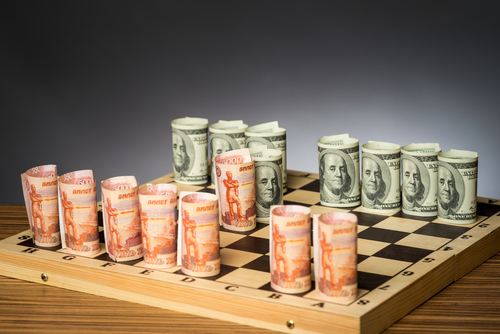 Since late February, Russia has been hit with punishing economic, trade and financial sanctions. Putin struck back and said all energy sales to unfriendly nations will now be in Rubles. Saudi Arabia also agreed with China to sell oil in Yuan. These are historically critical events that have torn the world economy asunder. There will NEVER BE A RETURN TO NORMAL. The Biden Administration was destroy the world economy and when people do not trade freely with one another, they wage war.

So while the Western Press cheers and reports that Russia is careering toward a debt default, they forget that the default will be on the West. A very rapid technological decoupling is also underway dividing the world economy and that will threaten free trade and the end of economic growth. Indeed, US GDP Growth rate peaked in real terms. World GDP will only decline thanks to these stupid sanctions that never work but are really intended for regime change in Russia.

The mass withdrawal of American firms from Russia will have a profoundly negative impact moving forward and the world economy is shrinking rapidly. Russia isn’t some weak power like Iraq. Russia is a major power whose population was, until recently, deeply connected to its larger global environment. The White House thinks that Russians will blame Putin rather than Biden. Eastern European states like Serbia and in the Middle East are looking at the United States as the problem being arrogant and interfering in everyone else’s affairs.

It is without question that the United States has declared war on Russia by an executive order denying the fact that it is the PEOPLE who must declare war through Congress – not the Biden Administration. This is how World War II began with countries attacking one another in the financial markets. The Neocons have usurped the White House and circumvented Congress bypassing any Declaration of War just as FDR in hopes that Russia will attack NATO and then Congress will be force to declare war. This is the very same trick that FDR used.

So while the Neocons lick their lips at the thought of overturning Putin and controlling Russia before they turn on China, they are clearly not looking long-term. They took out Saddam Hussein who kept the religious zealots in their place. Once he was removed, the Middle East saw the rise of ISIS. They then tried the same excuse to overturn Syria that he was abusing his own people. Russia stepped in and stop another endless war the Neocons tried to create with Obama. The US has been covertly funding the Ukrainian Nazis to keep up their fight against Donbass. Two Republican Neocons, Lindsey Graham and John McCain were there openly offering funding to keep a civil war against the Donbass going.

Let us may no mistake here. The Neocons pushed and funded through the CIA the Taliban for then they were the anti-Soviet resistance. The CIA Special Activities Division sent paramilitary officers to equip the Mujihadeen forces against the Soviet Army. The US therefore funded Taliban mainly to assist in ending the Soviet’s occupation in Afghanistan just as they are funding the Nazi element in Ukraine against Donbass. The Neocons engage in endless proxy wars.

However, the Neocons can never think past the end of their nose. They have no long-term strategies, only win what is immediately in front of them. The Taliban benefited from expanded foreign military support from the United States against Russia. They then used that training against US troops who were in search of terrorists from 911. Then the US was forced out of Afghanistan and left them the equivalent of $20,000 would equipment for every American citizen – you tax dollars at work.

The foolish view among the Neocons is they think bringing Democracy to the Middle East or now to Russia and China will somehow make them friends or stable is an absolute joke. The idea of creating a “Moscow Spring” by punishing the Russian people until they do what the CIA and Neocons demand does not make the costs of conflict worth it. Karl Marx brought his ideas and it cost over 200 million lives to install communism. America is hated for its interference by the Neocons in many circles from Europe, Middle East, and Asia.

Both China and Russia have American arrogance as a common enemy and the Russian or Chinese people will not send the Neocons flowers and Xmas cards thanking them for destroying everything they have built since 1989. However, RELIABLE sources in the Middle East confirm, the UAE, Egypt and even Israel are angry over Biden’s sanctions tearing the world economy apart. Yet the Neocons claim that total isolation forced regime change in South Africa. However, they also had no military power to fight back. That is like claiming a fight is fair when one kid has a rubber band and the other a baseball bat.

Somebody in Washington needs to start thinking strategically and realistically about this endeavor to isolate Russia for all that is unfolding at a rapid rate is the disintegration of the world economy. In 1989, then President George H.W. Bush understood there were serious risks with the collapse of the Soviet Union and Communism. Russia is big and powerful enough that its role in the world economy is vital to the overall health of the international order . The US NEEDS Russia as an economic friend not and adversary for nobody will win with that result.

The Western propaganda is that Russia and China represent authoritarian rule. However, Western governments are no better. The Neocons have seized the White House and they have imposed outrageous sanction of Russia trying to force a revolution there and this is a Declaration of War which they circumvented Congress. The have the media in their pocket to see this war to the people and they then hope to create such hatred of Russia among the people that Congress must declare war based upon the change in wind from the people. This is all staged to also hopefully make sure the Republican lose the November election to retain their full power since the Biden Administration is fully in the control of the Neocons.

Sure, we have elections pretending we are not an authoritarian government but then the candidate arrives in Washington and they are told they will vote according to the Party Agenda rendering the image of free elections only just that – fictitious. In Europe, the people do not vote for the Commission which makes the laws nor for the head of state. The only vote for Parliament which has no power to overrule the Commission or the head of state.

We do not live in a Democracy for the people never are allowed to vote on an issue like war or peace. The Neocons have declare war on Russia with sanctions and they are praying at the altar of war that Putin will strike. But what if Putin joins with China and they bond with North Korea and Iran and holy hell is unleashed?

The likelihood of Putin being overthrown and Democracy is sudden born has less than a zero change of ever being correct. Humanity needs regime change in all of the three major powers – the purging of Neocons that exist in all governments.