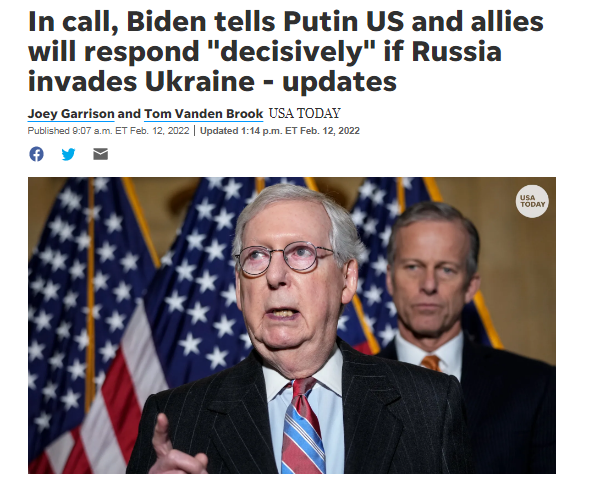 In all honesty, Biden is the very last person you should put on the phone with Putin, who is clearly the most intelligent world leader on the stage today. The US is showing it is pathetic, incompetent, and barks but has no teeth. The West has clearly surrendered Ukraine to Russia. There is no way Ukraine will be allowed into NATO. On that score, pretending that Biden rejects every request from Putin is really a joke – Putin has won already. Mitch McConnel is also a joke and should be run out of Washington. The major issue is to pull all nukes and NATO forces back to where they were in 1997.

Macron’s meeting with Putin was also pathetic. Biden’s phone call was a real joke. They called it a high-stakes phone call on Saturday morning that was a complete failure because it once again was no concession to any point and just more of the same threats. The White House admitted failure stating “no fundamental change in the dynamics unfolding now for several weeks.” Typical, Biden told Putin that “if Russia undertakes a further invasion of Ukraine, the United States together with our Allies and partners will respond decisively and impose swift and severe costs on Russia,” according to the White House.

Biden’s handlers and all Western allies began to evacuate their embassies in Kyiv. American diplomats moved to Lviv in western Ukraine, where they could be more easily evacuated if a Russian invasion begins. Biden has ordered all 150 American military trainers and members of the Florida National Guard who have been in Ukraine to help its forces prepare for a potential invasion to leave. 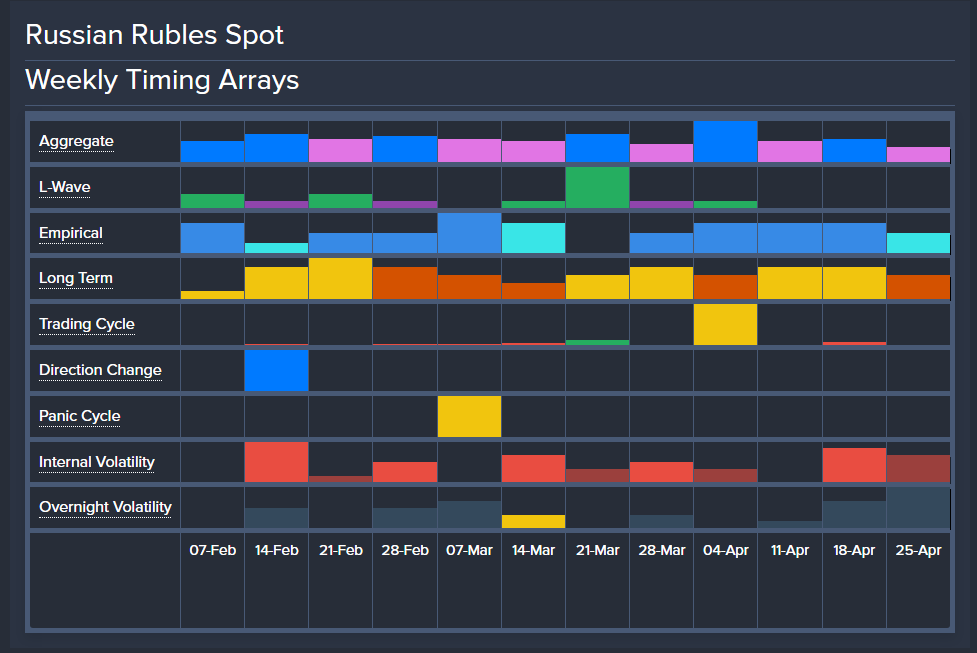 Russia has already liquidated its US bond holdings but there is no indication that China has begun any wholesale liquidation of US debt at this time. While our model shows this was a Panic Cycle week and that the capital flows were indicating a geopolitical event, despite the US intelligence officials reporting that Putin has given the order to attack its neighbor within days, this may be faulty intelligence as they did in Afghanistan. Perhaps they have no intelligence beyond climate change these days. While our model targeted the week of February 14 as both a Directional Change and high volatility, the Panic Cycle in the Ruble is going into the Week of March 7th with the rise in volatility the week of the 14th. Of course, if Putin invaded and stopped with the East, that may be a way to watch Germany freeze in this very cold winter and call the West’s bluff. 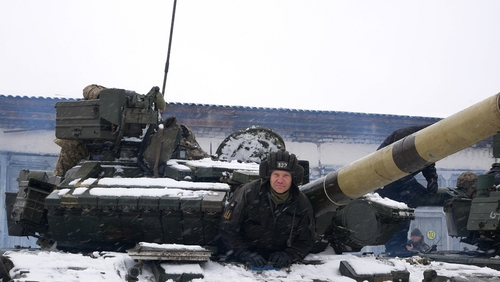 US intelligence claims that a Russian invasion would be preceded by two days of aerial bombardment and electronic warfare, followed by a ground assault with the potential goal of overthrowing the Kyiv government. They just may have no clue and assume this is an all-out invasion to take all of Ukraine. 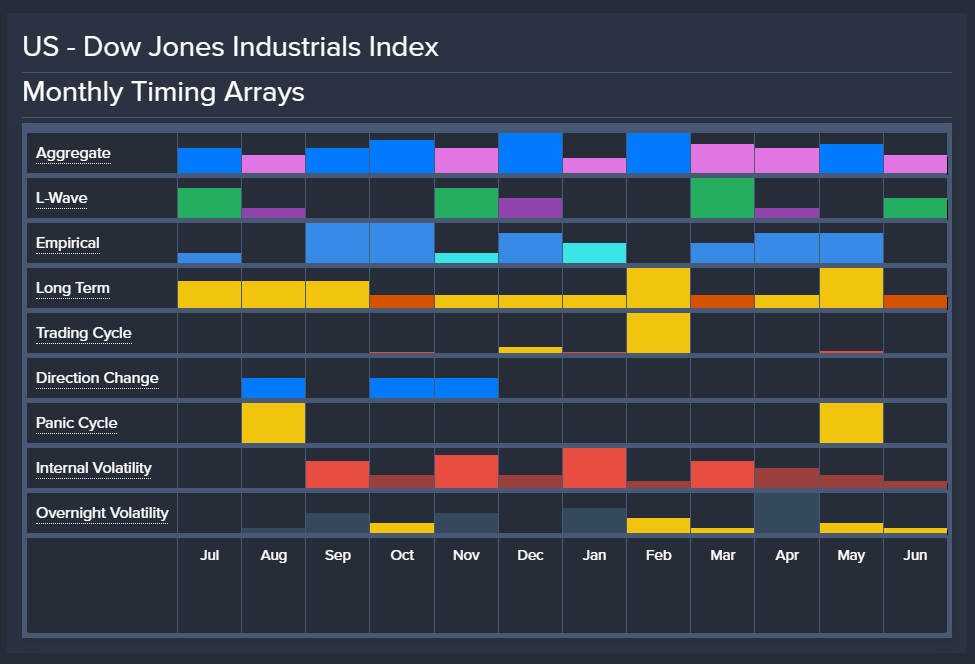 A lot of people have asked about how the hell can our computer project these targets even near-term a year in advance? Most people have a theory and then try to find facts to support it. That is why such analysis always fails. I discovered the incredible regularity of time and I did not begin with a theory so I am still trying to understand why the timing is so accurate. Here is a chart of the Monthly Array on the Dow from last July 2021. Even back then December and February were the strongest targets as you can see in the top Aggregate of 72 separate and independent models. December was the high intraday or on a closing basis in so many markets and here we are in February. Correlating everything with Russia allows us to hone in on the timing and where. It is not my personal opinion.

When we look at the Dow Array, this hinted that we could get the opposite trend from February into March and this opens the door as I said at the WEC, a high on the ECM turning point would also warn of a potential decline into 2023. Take note that May is a Monthly Panic Cycle. Clearly, a March high would not look good going forward.

With the US telling the world that Putin will invade this week, Putin is perhaps more inclined to keep the mystery going. He has won insofar as the West is abandoning Ukraine. Even if Putin enters Ukraine, he will most likely stop taking the East which is predominantly Russia ethnically. The likelihood of him bombing Kyiv does not appear to be very high. Time is on the side of Putin and he has proven to Ukraine that the West is not about to defend them and that NATO is weak. Putin has achieved his goal – the West ran with its tail between its legs.

If the West dared to try to remove Russia from SWIFT, we are looking at an incredible rise in commodities and expanding the shortages. Even car production is dependent upon platinum. Energy prices would rise sharply in Europe, and I really do not see how Germany can afford to turn off the gas from Russia. This is one giant mess and it seems that either these morons are intentionally slapping Put in the face and begging for him to invade so they can escape the COVID nightmare they have created, or we truly have the most unqualified group of world leaders in all recorded history.

Our model is picking up the panic of the West withdrawing from Ukraine and the wealthy in Ukraine rushing to get their capital out to the USA for safe-keeping. All Putin has to do is sit back and watch the West collapse further and he is very smart. Why invade and allow the West to escape COVID using Russia?

Rome fell because of internal weakness which the Barbarians’ then could smell the weakness. The West will fall. It has at best 10 years remaining. The WOKE movement is dividing and weakening society. The more divided, the easier it is for the collapse. Civilization rises when everyone comes together and benefits. It falls when one group tries to exploit another. Canceling people for something they said or did 20 years before is absurd. I think we all have said something stupid in high school. It seems to have begun with Kavanaugh’s hearing for the Supreme Court dragging up allegations from school decades before. If something happened back then, why wait 30 years to bring it up?

We are cascading into oblivion. Of course, every society that has ever attempted Marxist socialism style from the days of the first Communist society, Sparta 5th century BC, has cascaded into oblivion. Sparta was so Communist, they never even issued coins because that would encourage individual wealth. So here we go again and nobody ever bothers to consult history to ask a simple question:

Has anyone tried this before? Did it work?