The Jeffrey Epstein Affair & the Deafening Silence from Washington 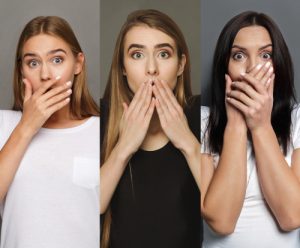 Why is no one in the D.C. political class and media bubble really talking about the Jeffrey Epstein affair? They will mention it casually, but they prefer to allow the Squad to call, Trump, a racist than address an issue which could lead to high levels of the political class. The media also seems to be avoiding asking the right questions like: Exactly how tight is the friendship between former President Bill Clinton and Mr. Epstein? who owns a private island in Florida and is now accused of having sex with girls as young as 12 and procuring young girls for sex with other friends of his? What was Bill Clinton doing on the island with Mr. Epstein on multiple occasions? Bill Clinton claims he only traveled with Epstein four times and he knew nothing about his crimes. Then the Washington Examiner reported that Clinton traveled with Epstein 6 times – not four. Yet verified and widely reported evidence from pilot logs reveal that Clinton took six trips involving 27 different flights with Epstein.

After Epstein was indicted, the government raided Epstein’s townhouse uncovering a virtual treasure trove of evidence, including reams of photos and videos. Many of the photo discs have been argued include names of young women as well as dates. Most of the young women allegedly appear to be underage. This story has been talked about behind the curtain a very long time. Some hoped it could be used as a tactic in Hillary Clinton’s campaign.

Nevertheless, the Left-Wing Media Machine has been pretending that anyone who asks questions about the Epstein-Clinton connection is a paid political operative of the Right-Wing Media Machine. The Right-Wing Media Machine, which would normally be jumping for joy about this or any sordid affair involving the Clintons, has remained very reserved in hyping the case. The silence from both sides has been deafening. This raises the question of why are both sides trying to avoid this topic? Is there just a fear that this could expose a lot of political leaders? How did our political and media elites ever become so hopelessly corrupt?

The Jeffrey Epstein story erupted after Virginia Roberts gave a sworn statement in a federal court filing that claimed that that under Mr. Epstein’s tutelage she “was a teen sex slave forced to have sex with Prince Andrew” and that she also saw Bill Clinton on Mr. Epstein’s “orgy island.”  Bill Clinton’s conduct with Monica Lewinsky suggests that he too may be what some call a sexual predator, but not that he was previously engaged with minors. Bill Clinton reportedly interrupted one sexual encounter with Monica Lewinsky to take a call from a Cuban-American sugar baron from the crucial battleground state of Florida.

Media coverage about the Epstein case has been sadly predictable. None of the media has pointedly and persistently asked important questions about the case.  Bill Clinton has already been implicated in the Epstein scandal. The media will run photos of Trump with Epstein to divert the fact that he was not one of the regulars with Epstein. Showing pictures of Trump and Epstein is clearly a way to try to paint him with the same brush of Clinton. Obviously, this Epstein affair is a national disgrace and shines a bright light on the current sad state of American politics. There are rumors that the Trump Administration allowed Epstein to be indicted knowing that this could unnerve the Democrats for 2020.

Clearly, Bill Clinton took repeated trips on the “Lolita Express” with an actress in softcore porn movies whose name appears in Epstein’s address book under an entry for “massages.” According to flight logbooks reported by Gawker, they show that Clinton shared more than a dozen flights with a woman who federal prosecutors believe procured underage girls to sexually service Epstein and his friends. That would place her as a co-conspirator who they could use to flip on Epstein. It has been rumored that 35 female minors have been identified by federal prosecutors who they allege were sexually abused by Epstein. He has reportedly settled lawsuits from more than 30 “Jane Doe” victims since 2008 alone and the youngest alleged victim was 12 years old at the time of her abuse.

The question that will be answered only with time has been is this retribution for the Democrats Russia Gate?

« Were Banker Ever Prosecuted During the Great Depression?
Federal Judge Held Robert Mueller Had No Evidence to Support Russian Government was Behind 2016 Social Media Manipulation »