The Coming Political Siege Warfare of 2019 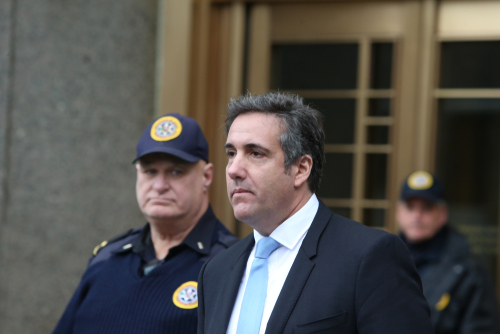 As I have warned, the next two years are going to be an outright political siege warfare. Far more damage will be done to the United States and the world economy in this desperate attempt for the Democrats to retake the White House in 2020. Congress will launch its investigation of Trump’s role in Cohen’s plea that Trump told him to pay hush money to the two women about previous affairs. Claims that Cohen sought to influence the election from the shadows is really petty when they could thereby criminally charge all the board members of Goldman Sachs who banned their employees from donating money to Trump, which is also trying to “influence” the election from the shadows. But that is the problem with the law – it is selective prosecution all the time.

Cohen said the payments to an adult film actress and a former Playboy Playmate were made “in order to influence the 2016 presidential election.” Those are clearly words written by the prosecutor. Those payments, prosecutors say, violated 52 U.S. Code § 30101

(A) The term “expenditure” includes—

(i) any purchase, payment, distribution, loan, advance, deposit, or gift of money or anything of value, made by any person for the purpose of influencing any election for Federal office; and
(ii) a written contract, promise, or agreement to make an expenditure.

The theory of how this violated campaign limitations is that the maximum an individual can contribute is $2,700. Since Cohen paid the women, prosecutors made it clear that the payment was a campaign contribution because Cohen was repaid by the Trump Organization after he submitted “sham” invoices for legal work.  Then the question falls to did those in the Trump Organization know they were “sham” invoices? Does that then rise to Trump personally? This is where it takes Cohen to say “Trump directed me to make those payments” in order to impeach Trump. The whole thing is rather strange for Trump would have the power to pardon him. He is clearly cutting that option off by this plea. If what Cohen says is true, Trump conspired to violate campaign finance laws by directing payments to keep the women quiet so as to boost his election prospects. Yet the prosecutors also told the court Cohen tries to save himself by blaming others. That merely clouds the issue and calls into question Cohen’s testimony against Trump.

So they also charged Cohen with tax evasion which would be a different issue. To reduce his time, he has to say the words that the prosecutors tell him that will then implicate Trump as a co-conspirator to a felony. This will give the Democrats the foundation to file an impeachment action regardless of the truth. The trial, however, would be in the Senate. Trump would tend to be the type to go to trial.

To start the impeachment process, there must first be drafted the articles of impeachment. Then the 40 members on the House Judiciary Committee vote over whether to bring them to the full House of Representatives. A simple majority vote is needed, in this case, which means 21 members of Congress voting yay are needed in this phase. The Democrats can do that assuming they all vote party line as usual.

Assuming the Democrats vote along party line as expected, the articles of impeachment will then move to the Senate for a Trial. By the time the process brings the president before the Senate in order to defend himself, the “impeachment” part is done. What occurs then is a procedure that would see the president prosecuted by a group of “managers” from the House of Representatives, while a Supreme Court justice presides over the trial. The Senate then acts as the jury. In order for the president to be removed from office, in this case, it would require a two-thirds vote among the 100 senators or 67 votes. That means, 20 Republicans would have to vote to remove him from office. Bill Clinton was impeached and it went to Trial but there were not enough votes to remove him and he too committed a felony of perjury that was directly himself – not a conspiracy.

Elite Republicans hate Trump because he is an outsider. Nevertheless, will 20 Republicans cross lines and vote to remove Trump from office? That is not very likely given the indirect charge of pay money to two women. The charges from Mueller will have to be more direct to win a Senate Trial to remove Trump. No president has ever been removed. The process will be more directed to cripple Trump for 2020 so the Democrats can seize the White House and reverse everything Trump has done including raising taxes substantially and imposing a Global Warming Tax. The Democrats want to raise taxes on the rich to 60% to 70% like the good old days, with plenty of loopholes to gather political donations for exceptions.