Supreme Court Does Not Vote on Just Party Lines

QUESTION: Marty, Biden set up a commission to investigate stacking the Supreme Court. Roosevelt did the same thing to create socialism but he lost on that issue. Do you think Biden and these democrats like Pelosi and Schumer will fail in this effort?

ANSWER: Actually, Roosevelt had contingency plans to stack the court, but the issue was over his Executive Order confiscating gold. The Supreme Court shocked everyone by upholding it. But the mix was opposite of even what Roosevelt believed would happen. Chief Justice Huges supported Roosevelt, and he was appointed by Hoover — a Republican. The Democrat appointed by President Woodrow Wilson, Justice McReynolds, dissented and was against Roosevelt. The decision was 5 to 4 that took the gold away from Americans. 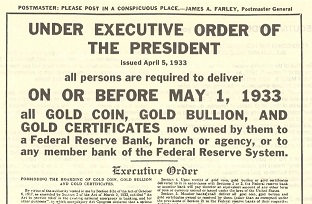 This has been my point. Just because a justice is appointed by a Democrat or Republican does not guarantee they will vote like politicians along party lines. If Chief Justice Hughes voted against Roosevelt, then he probably would have stacked the court. Also, Chief Justice Roberts voted for Obamacare despite the fact he too was appointed by a Republican.

« We Have No Rights
Eviction Moratorium »