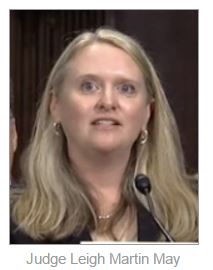 The U.S. federal courts do whatever they possibly can to avoid real issues to maintain powers that are clearly unconstitutional. I reported last year when Judge Leigh Martin May struck down a SEC order on this challenge back in June 2015. Now on September 15, 2016, the 11th Circuit Court of Appeals has dismissed it, claiming that such a challenge must FIRST be made in the administrative court that is not constitutional to begin with. An administrative law judge does not even have to be a lawyer. They can be someone’s mistress, brother-in-law, or someone who promised some favor. They are not appointed by the president and they do not go through hearing in Congress. They can degree fines and strip you of all rights to effectively live, but the only consolation is they cannot imprison someone. They can fine you into bankruptcy and destroy your entire family financially, but hey, so can a local policeman using civil asset forfeiture.

This ruling demonstrates that there is no rule of law. They can spin you in circles, and unless you are a multi-millionaire, you will never get to the Supreme Court and they know that. The object of federal courts is always to sustain government power to PREVENT anyone from actually using the constitution to defend themselves. In this case, it took one year just for the 11th Circuit to figure a way out of having to rule on the issue, which is the standard way of ruling — avoid the issue whenever possible. It would have taken them at least a few years to get through the SEC — a year to get into the district court, another year for an appeal, and then a year for the Supreme Court who would rule they are too busy so they need not fulfill the Constitution.

Article III of the U.S. Constitution does not authorize administrative law courts. It does not even require federal courts. The “judicial power” is exclusively vested in the Supreme Court ONLY!!!!!!! It merely authorizes Congress may create federal courts if it desires.

The judicial power of the United States, shall be vested in one Supreme Court, and in such inferior courts as the Congress may from time to time ordain and establish. The judges, both of the supreme and inferior courts, shall hold their offices during good behaviour, and shall, at stated times, receive for their services, a compensation, which shall not be diminished during their continuance in office.

The mere fact that the Supreme Court has claimed it can pick and choose what it wants to hear is  COMPLETELY UNCONSTITUTIONAL. There is no discretionary power granted by the Constitution to the Supreme Court — NONE!  As a result, there can be no rule of law if there is no  ABSOLUTE right to be heard by the ONLY court that the Founding Fathers created. This is why I decided I did not want to be a lawyer. It was all a farce. I would have been in Washington, pounding on the door until they explained how they stripped all citizens of the right to be heard. They stole all of our rights and then demanded we call them honorable.

« Saudia Arabia to Sell All US Assets as Congress Overrides Obama Veto
What Happens if Hillary is Indicted? Will She Be Impeached? »