Is the Lockdown A Violation of the Constitution? 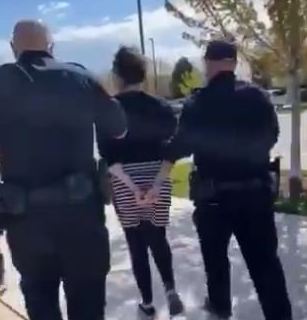 In Idaho, despite having a Republican Governor, the police have violated the human rights of a mother who took her too small children to a park and was arrested and handcuffed in from of her children in a playground. Sara Walton Brady, 40, of Meridian, Idaho, was arrested and handcuffed for allowing her children to play on climbing equipment at a town park.  The Meridian Police Department had to respond with a public statement to justify what they did claiming she “was noncompliant and refused to leave after being given many opportunities, so she was arrested on one count of misdemeanor trespassing.”

There is recognized power inherent in government to impose civil confinement for mental incapacity. In Addington v. Texas, 441 U.S. 418 (1979) a mother filed a petition for her son’s indefinite commitment to a state mental hospital in accordance with Texas law. Her son had a long history of confinements for mental and emotional disorders. The jury found that appellant was mentally ill and that he required hospitalization, and the trial court ordered his commitment for an indefinite period. The state trial court had instructed the jury to determine whether, based on “clear, unequivocal and convincing evidence,” he was mentally ill and required hospitalization for his own welfare and protection or the protection of others. He appealed and contended that the trial court should have employed the “beyond a reasonable doubt” standard of proof. The Supreme Court reversed and held that simply a “clear and convincing” standard of proof was all that was required by the Fourteenth Amendment in a civil proceeding even to commit an individual involuntarily for an indefinite period to a state mental hospital. Pp. 441 U. S. 425-433.

However, this decision does not truly apply when you are locking-down the entire population for they have not been afforded any due process right whatsoever in any court regardless of the standard of proof. Therefore, we must look further to find if there is any authority under the Constitution regarding quarantine lockdown orders.

We have to look historically as to what has the United States Supreme Court upheld with respect to such exercises of the states’ general police powers to protect public health through quarantines and other measures. The Supreme Court in Jacobson v. Commonwealth of Massachusetts, 197 U.S. 11, 25, 25 S.Ct. 358, 49 L.Ed. 643 (1905) upheld a Massachusetts law requiring vaccination against smallpox  Id. at 39, 25 S.Ct. 358. The Court held that such a measure, enacted to protect public health, will not be struck down unless it “has no real or substantial relation to [that goal], or is, beyond all question, a plain, palpable invasion of rights” secured by the Constitution. Id. at 31, 25 S.Ct. 358. To uphold that law, the Court analogized to the unquestioned power to quarantine even an outwardly healthy individual entering the United States:

An American citizen arriving at an American port on a vessel in which, during the voyage, there had been cases of yellow fever or Asiatic cholera, he, although apparently free from disease himself, may yet, in some circumstances, be held in quarantine against his will on board of such vessel or in a quarantine station, until it be ascertained by inspection, conducted with due diligence, that the danger of the spread of the disease among the community at large has disappeared.

Thus Reynolds v. McNichols, 488 F.2d 1378 (10th Cir.1973), relying in part on Jacobson, upheld an ordinance “authorizing limited detention in jail without bond for the purpose of examination and treatment for a venereal disease of one reasonably suspected of having a venereal disease” 592*592 as a valid exercise of the police power. Id. at 1383.

In U.S. ex rel. Siegel v. Shinnick, 219 F.Supp. 789 (E.D.N.Y.1963), the court permitted the quarantine of a woman who had arrived in the U.S. from Stockholm (deemed “a smallpox infected area”) without presenting a certificate of vaccination. Id. at 790-91. The court upheld an administrative order that she be quarantined for 14 days, the length of the smallpox incubation period. Id. It acknowledged that public health officials “deal in a terrible context [where] the consequences of mistaken indulgence can be irretrievably tragic.” A better-safe-than-sorry determination was therefore entitled to deference, absent a “reliable showing of error,” id. at 791:

Their conclusion, reached in obvious good faith, cannot be challenged on the ground that they had no evidence of the exposure . . . to the disease; they, simply, were not free and certainly not bound to ignore the facts that opportunity for exposure existed during four days in Stockholm, that no one on earth could know for fourteen days whether or not there had been exposure. . . .

Some courts have indeed struck down quarantine orders as well, however, when they were found to be arbitrary and unreasonable in relation to their goal of protecting the public health. In Jew Ho v. Williamson, 103 F. 10 (C.C.D.Cal.1900), the court found that sealing off an entire section of San Francisco to prevent the spread of the bubonic plague was “unreasonable, unjust, and oppressive.” Id. at 26. Such an overbroad order, the court declared, was “not in harmony with the declared purpose” of preventing the spread of the disease. Id. at 23.

In another case, the court also found the order was beyond the power of government and was thus of similar concern in In re Smith, 101 Sickels 68, 76, 146 N.Y. 68, 40 N.E. 497 (1895). There, the New York Court of Appeals rejected the blanket quarantine of individuals who refused vaccination, when there was no reason to believe they had been infected or even exposed to that disease.

Building on the legal principles, it can be reasonably argued that the initial decision to quarantine the entire society or to even demand worldwide vaccination as Bill Gates has been demanding, is beyond the power of government. This clearly bears no real or substantial relation to the protection of public health, and it is obviously arbitrary and oppressive. At a minimum, a complete quarantine of society shutting down all commerce is arbitrary and oppressive.

There is not even clear and convincing evidence that a woman simply taking her two young children to play on swings threatened either society or the lives of her children. In Idaho, there were 1,766 cases in total with only 51 Deaths. The total population of Idaho was 1.7 million in 2019. Locking down the entire state for such a tiny fraction of the population testing positive was a violation of her Civil Rights actionable under 42 U.S.C. § 1983.