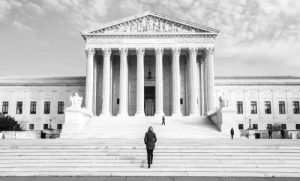 QUESTION: Marty; What is your opinion on the Democrats threat to stack the Supreme Court if they win the presidency?

ANSWER: I believe that the Supreme Court should be restructured. The Constitution ONLY created the Supreme Court and Congress could not shut it down. However, all other lower Federal courts are statutory, created by Congress. It was Congress that unconstitutionally refused to expand the Supreme Court and instead, granted it the right to pick and choose what cases it wants to hear. This, in my opinion, violated the Constitution because it was the ONLY court created by the Founding Fathers and not expanding it to hear every case presented, to me means you are denied a tripartite government.

The lower courts know that the odds of ever being reviewed are slim to negligible. So people can be tortured, abused, and they do not have to comply with the law by any means. There is no rule of law because each circuit has its own rules and precedents. In theory, the Supreme Court is supposed to resolve conflicts between the circuits. But that is purely on a discretionary basis. This current structure means you are denied the right to Equal Protection of the Law when each circuit acts independently.

However, the Democrats’ threat to pack the Court if it doesn’t rule the way they want is a threat to intimidate the court which is in itself UNCONSTITUTIONAL. The very reason Justices are appointed for life is because the King would fire judges who ruled against him. So here we have the Democrats demonstrating that they seek to impose by dictatorial powers their view on the majority of the people even if they cannot win the votes of the people. That is an outright affront to the separation of power and the very principle of a Free Society.

The Democratic lawmakers have openly threatened the court with political retribution if it did not dismiss a gun-rights related case in which they submitted a brief in support of New York City urging the Supreme Court to dismiss a case involving the transportation of locked and unloaded handguns. The Democrats brief stated that “courts do not undertake political ‘projects,’ or at least they should not.” The Second Amendment is not political – it is the Constitution.

Clearly, this attempt by Democrats to intimidate the Court is outrageous and very dangerous. It demonstrates how and why the United States will decline and fall. There is no respect for the rule of law. The polarization in the country is just off the charts and this will undoubtedly lead to violence.

I believe the Supreme Court should be restructured, but I would add sub-justices and allow the Supreme Court to hire them on the recommendations of the American Bar Association (ABA) who should nominate unanimously each candidate – not Congress or any President. It should be life in prison for anyone to lobby the ABA from any outside group to select a particular candidate. There should be a lower tier of courts in the Supreme Court and then the Nine Justices sorts out any conflicts. This will give the ABSOLUTE Right to be Heard which is the foundation of Due Process of Law.

The Due Process Right to be Heard comes actually from the Bible. The basis is that of Cain and Able where one kills his brother and obviously God knew what he did. He still summons Cain to give him a Right to be Heard despite the fact he knows he is guilty.

Therefore, knowing that Cain killed Able, he still gave him a Right to be Heard which is the foundation of Due Process of Law. In my view, one can be tortured and abused in any Federal Court. If you are denied the Right to be Heard in the Supreme Court you will die denied everything that we ask citizens to defend in war with their lives.

What the Democrats are proposing is effectively the overthrow of Democracy and to impose one-party rule of law. This illustrates the importance of the 2020 elections. This polarization is going to explode in 2020.

A look at the voting records of individual justices clearly shows that they DO NOT rule on party lines. It was Chief Justice Roberts who upheld Obamacare as a Tax joining the Democrats when he was appointed by George W. Bush. It just does not work on party lines all the time.

Even a Justice appointed by a Republican would still uphold Roe v. Wade, 410 U.S. 113 (1973), was a landmark decision of the U.S. Supreme Court in which the Court ruled that the U.S. Constitution protects a pregnant because it cannot interject religion into the rule of law. What if the court became mostly Muslim? Would divorce then be up to overrule along with Polygamy, the practice of marrying multiple spouses?

Religion cannot be allowed to become the rule of law then you deny the freedom of religion no matter how much it offends someone’s individual beliefs. That’s God’s job to make those types of judgments. He will sort them out – not politicians.