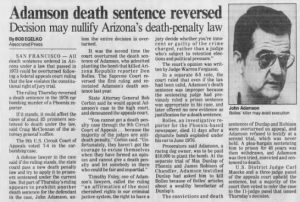 ANSWER: It is far worse to live in prison for life the way the government will torture you without remorse. They are beginning executions once again since 2003. Their allegations against people are always exaggerated and they are cold-hearted. I never met anyone who ever did everything the government claimed and there is a risk that the people they intend to execute are innocent or never intended to do such a crime. The real professional criminals know the system and immediately start testifying against others to get a reduced sentence. So the people they want to execute had nothing to deal with, which tends to imply they were not necessarily career criminals and if they were nuts, that is never a defense anyway. In the famous case of Adamson, he pled guilty waiving a jury trial with the understanding he would get a life sentence and then in 1988 the judge ordered him to be killed. That was eventually overturned that his plea was contrived by the courts themselves promising him one thing and then ordering him to be executed. There is no honor in the Justice System – none whatsoever!!!!!

I personally think the death penalty should be VOLUNTARY for there are people who would take that option rather than being imprisoned for life. If I were in such a position, I would certainly volunteer in a second. To live the rest of your life being tormented by guards for fun and sport is no way to live and no judge will EVER listen to a complaint from an inmate. I simply asked to be given medical treatment and I was denied by two judges and had to wait until my release to seek medical attention. As a result, the vision in my left eye remains partially blurry because they refused me my basic human needs.

Death is an escape; it is not a punishment for it is over fast compared to incarceration that remains for your entire life.