Zimbabwe – New President is Sworn In 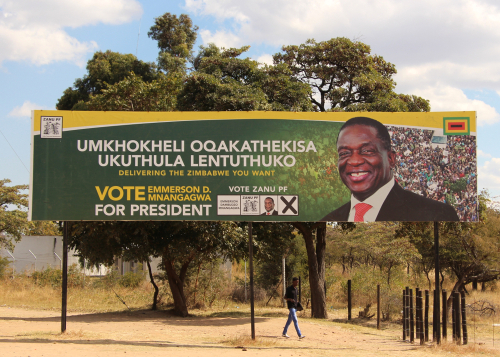 QUESTION: Dear Mr. Armstrong,
Zimbabwe is just coming out of a very hard time. Their currency is not (at least to my knowledge) recognised internationally. What advice would you give to the Government as they try to sort out this situation? Would you consider advising them on the way forward so that they do not make any fundamental errors in the beginning. It is a lovely place, I can assure you, if you do go.
Best regards,
CH

ANSWER: I am aware of the hope which has taken hold there in Zimbabwe with the tens of thousands of people celebrating the victory of President Emmerson Mnangagwa yesterday. He really needs to restore world confidence and that is possible. He finished out Mugabe’s term but almost 20% of the white population fled and Mugabe was a Marxist. It will take some political guidance, but if he would really listen, he could actually transform your country into a powerhouse. The first and primary directive is always the rule of law. If a property can be taken, then capital will never trust such a nation. It falls into the category of Country Risk.

Overall, the economy of Zimbabwe was quite strong. From 1991 to 1996, the Zimbabwean Zanu-PF government, which was in power since independence, and its President Robert Mugabe adopted an Economic Structural Adjustment Programme (ESAP) that was really insane and we see similar policies rising in South Africa. Mugabe created an extremely serious economic change that was not unlike the drastic approach of Maximinus I of Rome. Maximinus effectively attacked the rich and paid informants who reported anyone with hidden wealth. Commerce began to collapse and it was his actions that really began the decline and fall of Rome into 268AD.

We have to be honest here that Mugabe created the hyperinflation in Zimbabwe that began in the late 1990s because of his Marxist philosophy shortly after the confiscation of private farms from white landowners towards the end of Zimbabwean involvement in the Second Congo War. During the height of inflation from 2008 to 2009, it was difficult to measure Zimbabwe’s hyperinflation because the government of Zimbabwe stopped filing official inflation statistics. However, Zimbabwe’s peak month of inflation is estimated at 79.6 billion percent in mid-November 2008.

We would provide a set of proposals, but it would have to be confidential. If President Mnangagwa agreed, then and only then could we make them public. The risk of creating false hope in markets is not wise.