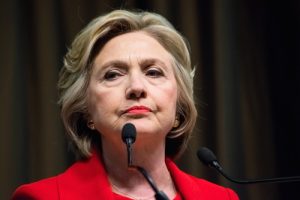 QUESTION: Do you think Hillary will run in 2020?

ANSWER: I would say yes. I know that the big Democratic donors are yelling they will not fund Warren. Hillary has been cagy, but the coup against Trump is in full motion. The FBI just came out of the blue to say they exonerate Hillary. You have to read the fine print. What they are saying is NOT that she is innocent, but she did not KNOWINGLY violate the law. You would be prosecuted for such an act for the presumption is you know what the law is. In Hillary’s case, the FBI has turned the law upside down. They are doing that to clear the way for her to run in 2020. The FBI does NOT exonerate anyone else. They NEVER comment on investigations as a matter of policy. They ONLY recommend charges and NEVER pronounce someone as innocent. This is obviously a ploy to prepare Hillary for 2020 to overthrow Trump. They just want to go to war.

That said, Biden is a joke. She has intentionally attacked Hawaii Rep. Tulsi Gabbard indirectly saying she is “cozy” with Russia in the past. She is already bringing up the Russians again. It certainly appears she is just waiting for the herd of candidates to beat each other to a pulp and then step in.  The big-money donors will fill the coffers for Hillary – not Warren. Nobody seems to believe that Joe Biden has a shot at beating Trump. So the game is in play.

The primary elections are scheduled to take place from February to June 2020 in all fifty U.S. states, the District of Columbia, five U.S. territories, and Democrats Abroad. So Hillary will jump in perhaps on the ECM turning point in January 2020.

Hillary is supported by the intelligence community for she will take the country into war. Trump is anti-War. He has explained the hardest part of the job is writing letters and meeting families whose children or husbands have died in some military action. Over 40% of Americans believe that the US is sticking its nose in too many affairs overseas which in turn results in terrorist attacks against Americans. The intelligence community is trying to overthrow Trump at all costs. They know Hillary will declare war on Russia which is what they desperately want for Xmas.

I do not BELIEVE that even Hillary would defeat Trump in a fair election. But just as the 2016 election was our target for the first potential third-party candidate, 2020 is the target for the start of civil violence. We will run our analysis on the 2020 election. Just as a warning – it appears to be the most violent since the 1960s, and it appears to be the most likely to be rigged. That warns that if Trump were to lose, it would not be a fair election. The intelligence community and the neo-cons want war and the collapse of socialism needs an excuse to divert people’s attention from the unfunded liabilities they cannot meet. A serious war will help raise patriotism, they hope, and that will be the excuse as to why you must not blame the government when your benefits cannot be met.

« BREXIT Vote Delayed – Democracy Has Fallen
Is Trump Just a Product of the Times? »