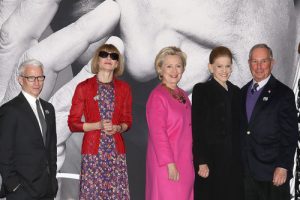 QUESTION: Do you think Hillary will run in 2020?

ANSWER: All my sources say YES!! She will wait for January. The rest of the pack is slowly expiring. Joe Biden does not have what it takes to be a President and his son was clearly involved in selling influence in Ukraine. Elizabeth Warren scares the hell out of the big-money donors.  However, the Democrats are in such disarray that we will also see Michael Bloomberg dip his toe in the water. He does not stand much of a shot but he has the backing of New York City which will try to indict Guiliani and take down Trump using legal intimidation to influence the election as they accused Russia. Trump has moved his residence to Florida from New York. That is a smart move not just to save 10% in income tax, but New York is intent on bringing him down for they want a career politician.

Anderson Cooper of CNN was posing with them. Is it any wonder why CNN is the leader of the Democrats these days? You cannot appear with them at events and then claim you are impartial. I have to deal with both sides and governments around the world. I cannot vote or I would not be able to project economies and seen as impartial. There are just some things you cannot do.

« Impeaching Trump to Shut Down the Government
The Whistle-Blower’s Lawyer Called for a Coup back in 2017 Against Trump – That’s Impartial? »