Will Elections ever be Valid Any More?

QUESTION: Mr. Armstrong; You have stated that you believe Kennedy was assassinated by the US Intelligence community. Given all this stuff with Comey, FBI, CIA, and NSA all conspiring against Trump, do you think that the real risk of interfering with our elections is not the Russians but closer to home? Is this a practice that always takes place that we are just suddenly becoming aware of these days?

see you in Orlando

ANSWER: Absolutely. It is being called Spygate and it is very disturbing. The Democrats did absolutely everything to put Hillary in office. They thought they won. They had the press in their pocket like CNN, New York Times, and the Washington Post leading a host of others. We have to realize that Democracy is dead. I really do fear that Trump will be the LAST democratically elected president. What comes after Trump is not going to be warm and endearing. 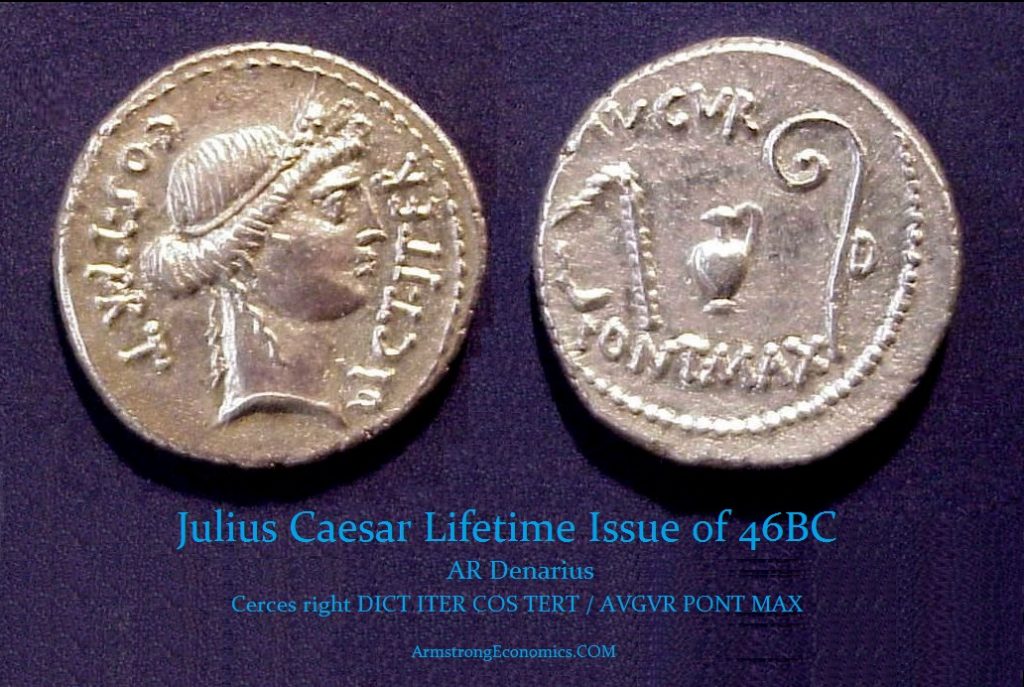 Politicians have been rigging elections since ancient times. There can be no greater example of political corruption that required desperate reform than the calendar. Cato or the more moderate Cicero both criticized Julius Caesar who became pontifex max (high priest) taking charge of the calendar. The Romans used the moon calendar but knew it was incorrect and thus it required adjustments by inserting days. The corruption degenerated to such a point that elections could be postponed by the insertion of days. This realization led to bribing the high priest to even insert months to affect the political elections. This is why Julius Caesar revised the calendar to eliminate the political corruption. Moreover, interest rates would rise during elections because of the amount of money being paid out in bribing votes.

In mid-April 2018, the report that the U.S. had 3.5 million more registered voters than “live adults” originated with a National Review article of 11 August 2017 that built on information compiled by Judicial Watch’s Election.  Some have criticized this saying it is misleading since the information was compiled from only 462 counties in 38 states, yet the entire U.S. comprises over 3,000 counties in fifty states. At the same time, they pretend to be fact-checkers. Many of those other counties might well have had substantially fewer registered voters on their rolls than adult residents who are eligible to vote. This type of analysis is really biased in and of itself. All polls are conducted as samples not checking every single county. Those claiming such criticism are biased themselves.

Nevertheless, the findings come from Judicial Watch’s Election Integrity Project are important. The group looked at data from 2011 to 2015 produced by the U.S. Census Bureau’s American Community Survey, along with data from the federal Election Assistance Commission. While those who try to shoot a whole in this study claiming they did not do every state miss the point. Trump won the national popular vote excluding California. The claim that Hillary really won the election turns exclusively on California which has 11 counties with more registered voters than actual voters. In fact, 10 of those counties voted heavily for Hillary Clinton. Los Angeles County, whose more than 10 million people make it the nation’s most populous county, had 12% more registered voters than live ones, some 707,475 votes. That’s a huge number of possible votes in an election. California’s San Diego County earns the grand prize for political corruption. San Diego has 138% registration which translates into 810,966 ghost voters.

Bernie Sanders went to see Obama because he should have won California but they stole the votes from Bernie to hand it to Hillary. Obama told him to suck-it-up and take one for the team. ONLY after that meeting did Bernie concede. In the 2016 presidential election, Democratic candidate Hillary Clinton won the state of California by more than 3.,4 million votes. We cannot say that the election was conclusively a victory for Hillary given what took place regarding Bernie. We just cannot definitively say one way or the other. This is why Stalin’s words ring so true.

The same story exists in Ohio and Chicago has been notorious for dead people still finding a way to vote. They have been known as the States of the Walking Dead. Yes, that was alleged in the 2016 election. People are clueless when it comes to election fraud. During the 1928 primary election, shootings and bombings were used to frighten and eliminate opponents. That election in Chicago saw two political figures killed and 62 bombings. It was called the “Pineapple Primary,” using the slang term “pineapple” for a grenade. They will use violence to prevent anyone from voting for anti-Democratic candidates.

When I warn that Trump may be the LAST really elected president between now and 2032, this is based upon a backdrop of rigging elections to keep the corruption in place. They have been rigging elections since the dawn of time. The 2016 election was an all-out war and they lost even with rigging California. They rigged the election in Scotland. Tony Blair in Britain wants another BREXIT vote so they can do a better job at rigging it again.

There are no real elections anymore – only when they actually didn’t elect to lose as in 2016 or BREXIT.