Why Republics Are Always the Worst Form of Government 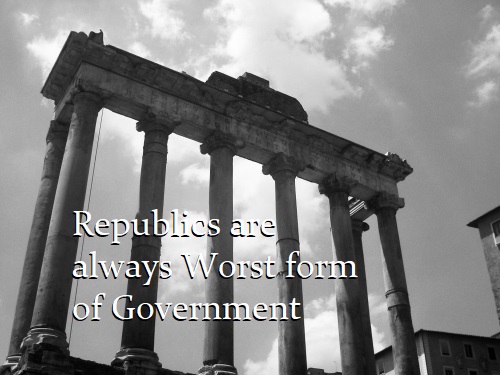 COMMENT: I think the only woman he shook hands with, ironically, was Margery Taylor Green, if that was her – it’s hard to tell these days. Another troubling idea he introduced, if I’m not mistaken, was to start indoctrinating kids in junior kindergarten.

At the end everybody crowded around Biden and held his fists for at least 15 minutes. I guess the virus left the room by then.
Swamp feeding the swamp. We the People have become We the Government.

REPLY: I find it very disturbing for this entire political mess is eating away at the very foundation of society. This is no longer Democrat v Republican, this has become the People v the Swamp. I find it interesting that 60%+ of Americans feel we need a third party. Even 70% of Republicans had said they would follow Trump confirming the support for Party Politics is declining rapidly.

I have said plainly that Trump was naive. They picked his cabinet and that is why he was in conflict with most from the start. You had people like Bolton going against him because he wanted to pull the troops out of Afghanistan. You hear not even a peep now that Biden is doing it.

Look at Britain, you have Boris Johnson a purported CONSERVATIVE acting like a total dictator. This is no longer political insofar as one party against another. As governments start to implode moving closer to 2032, what is collapsing is simply this form of Republican governments. Because of the fake news of Cicero, they thought Julius Caesar was a dictator against the people when it was precisely the opposite. The Senate fled because the people did not support the SWAMP back then.

Republics are ALWAYS the worst form of government for they always collapse into oligarchies. Ironically, Monarchies and Dictatorships are less prone to corruption for the leaders have the power and need not sell themselves to win the next election. Corruption was so pervasive in 53BC, that interest rates doubled because politicians were borrowing to pay bribes for the election. Such is the fate of all Republics.