Why Removing Trump Will Lead to Civil War 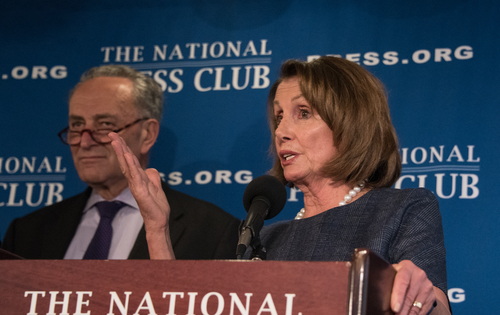 QUESTION: Marty; It seems that the left is winning in preventing Trump from really reforming anything and the Republicans themselves are divided over Obamacare. Do you see this change?

Thank you for what you do. It is striking how on point you have been.

ANSWER: The Democrats led by Chuck Schumer and Nancy Pelosi are fighting tooth & nail to save socialism. They always preach that they stand for the poor, but they take money from the rich. Hillary’s comment that you have to have a public and private agenda is no joke. This is standard operational procedure for ALL politicians in Washington. This was not just Hillary’s scheme – they all do this. The Democrats are tearing the country apart and in their quest to stop Trump at all costs, will indeed change the United States as we have known it. They are going way too far this time.

Obamacare has hopelessly screwed the country. It is the exploitation of the youth to fund health care costs for the older generations after the Clintons screwed the youth and made their student loans non-dischargeable in bankruptcy after getting a degree that is proving valueless. This is the same as in law.

I ask you when was the last time you beat your wife. Now, you are on the defensive side to prove you did not beat your wife. You call your wife to the stand and she testifies you never beat her. I turn to the jury and say, she only said that because she feared you would beat her again. A false charge dominates everything and you spend all of your time trying to prove you never beat your wife. This is how Obamacare has screwed the country. We set the tone with Obamacare and that has now confined all solutions that are within that scope.

The Republicans are hopelessly lost. They cannot fix the system. The only way to do this is to the scrap the entire mess. Anyone who could not obtain insurance should simply be put on Medicare/Medicaid. Nancy Pelosi is just a worthless politician hell bent of maintaining a corrupt system that is doomed. She said: “The Republican bill is one of the largest transfers of wealth from working families to the richest people in our country — Robin Hood in reverse.”  (Pelosi lives at a far higher standard or living than I ever did! She is by no means middle class.)

There is no money going to the “rich”; it goes to insurance companies. My personal insurance doubled as did my deductible and then I have coverage for young children I do not have but it’s there by law and I have to pay for it. The joke has become that you can just walk into a bar and tell the girls to line up, no worries, you are covered for unlimited maternity leave and children and there is no marriage requirement or age limit. That may be the only way to your money’s worth out of Obamacare.

If I were Trump, I would mandate all insurance policies must be reinstated pre-Obamacare. I would NATIONALIZE health insurance and make them function the same as Utilities. Yes, it would be an anti-free market, but the political system is such that the “free market” means they can bribe people like Pelosi to keep the money rolling in. Impose term limits, and then this measure would not be needed. But I do not see how this can be accomplished without a revolution.

Insurance companies must be compelled to apply for any rate increase whatsoever. They should not be allowed to cancel your insurance either. That is like going to a casino to play poker and they remove all the aces from the deck to make sure you cannot have 4 aces.

I would also impose Tort reform and provide a specific table of what you get for what type of injury. In law, it is cheaper to kill someone than it is to injure someone because you will have to pay all sorts of legal fees and an award that can be greatly exaggerated. Kill someone in an accident and it’s a flat award far less than injury in most cases.

Then you have the Democrats and the left, allegedly funded now by Soros, deliberately creating civil unrest to keep the socialist system intact. However, we have crossed that point of no return. The silent majority who voted for Trump have been pushed as far as they can go. Remove Trump, and we will descend into civil war. There will be no other democratic process to save the future left for these people who see things always getting worse and a future that holds nothing but declining living standards.

We have crossed that point of no return and this is really a battle for the very freedom of civilization. The left is never satisfied with allowing people to make their own decisions. I have been in discussions and the undertone is always the same. They hate anyone who makes more than they do and they covet whatever anyone else has and feel wronged that they are being cheated out of the same thing, but never wish to work for the same goals. The bottom line has always been that whatever society earns, belongs to the state and the state decides how much they are allowed to keep.

So no, I am not optimistic about the future. This will be the next great confrontation with not much difference from the Communist Revolutions of 1917-1918. What the Democrats did with Obamacare will only lower the living standards and the will premiums escalate out of control, consuming a larger part of personal disposable income. That lowers the economic growth consuming money people would be spending on other things. This is the GREED of insurance companies who are perhaps far worse than the bankers ever were. They own the Democrats and the press pretends this is a transfer of wealth from the poor to the rich when it is the exploitation of the youth and no money goes to the “rich”. It is going to the Insurance companies who have paid the Democrats to impose Obamacare on the nation.

While people like Whoopi Goldberg have now come out and denied that she said she would leave the country if Trump were elected, many people claimed they would leave but are still here. The Rev. Al Sharpton said: “If Donald Trump is the nominee … I’m also reserving my ticket to get out of here if he wins. Only because he’d probably have me deported anyhow.”

Because the Democrats under Obama have set in motion the greatest hunt for taxes in human history, it is becoming impossible to do business. We have three accounts at one bank. I walked in to open a fourth for the Florida operation. I was told since it was a Delaware corporation, I had to send myself a letter to Delaware, prove I received it, and then they would open the account. When I said I had three accounts with their bank, they responded: that does not matter. With every new account, we have to start from scratch. I walked out without opening the business account. If the Democrats force Trump out or tie the government in knots so nothing gets done, I may have no choice but to leave, just to do business. This is how insane everything has become. The same thing happened with our payroll company. I was told to set up another payroll account in Florida. They too had to proceed as if they did not know me when it was the same person I have spoken to for the last 5 years. The whole thing is just getting completely nuts – Papers Please!

« Degeneration of Politics
Disgusted with Congress Yet? »