We have TWO Constitutional Crises At Issue

While we now have people chanting to impeach Trump under the 25th Amendment, we also have a true Treasonous Constitutional Crisis of UNELECTED bureaucrats working to undermine an ELECTED official by the people. Regardless of the issue in play, which they refuse to describe as in the OP_ED, this is a major Constitutional Crisis that is brewing and it is all being orchestrated for the upcoming November elections. The whisper’s Behind the Curtain are actually loud and clear. The Democrats BELIEVE that Alexandria Ocasio-Cortez was elected because the bulk of the have-nots want more socialism and for government to increase taxes dramatically on the “rich” and corporations and hand it to them. Sort of like hiring a thug to rob your neighbor’s house because they have a nicer TV.

Article 3, Section 3 – Treason
Treason against the United States, shall consist only in levying War against them, or in adhering to their Enemies, giving them Aid and Comfort. No Person shall be convicted of Treason unless on the Testimony of two Witnesses to the same overt Act, or on Confession in open Court. 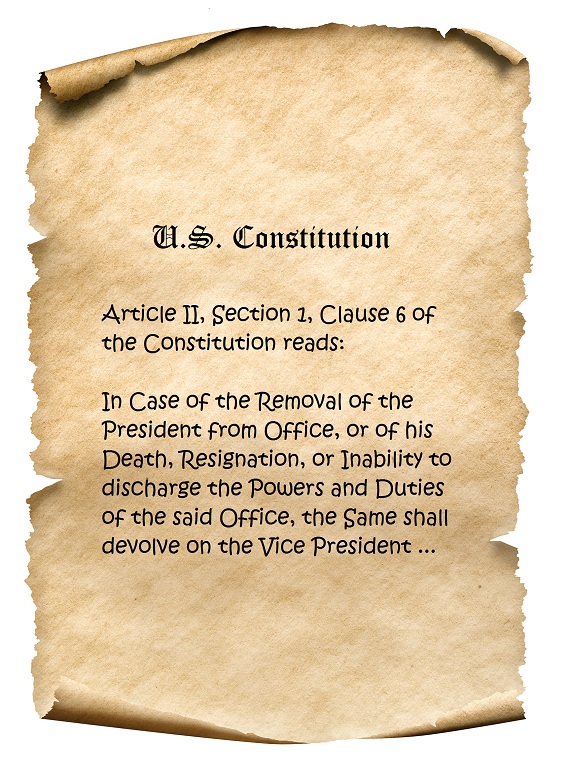 I find it unbelievable that you have the Speaker of the House Paul Ryan saying he sees nothing to investigate. That to me means he is either really stupid of or dishonest – and I think it is the latter. Lyndsey Grahm has changed his tune on Trump but he is saying this is not treason against the country just disloyal workers (listen to full clip). We do NOT know the motives of these people in the White House if they are being paid to undermine the government by domestic or foreign powers or are they doing this and have been paid in a desperate act to swing the November elections. There is no possible way to know if this is a plot against the country without an investigation.

The US Constitution Article II, Section I, Clause 6 actually made it clear that the death, resignation, or inability to discharge the powers of the office of the Presidency meant that he would be replaced by the Vice President. In 1967, this clause was partially superseded by the 25th Amendment.

The 25th Amendment, proposed by Congress was ratified by the states in the aftermath of the assassination of President John F. Kennedy. I believe it gained support because there was a sense that a conspiracy had been really implemented Behind the Curtain. The people I ever spoke to on the Hill never believed the Warren Report but would never say that publicly.

This 25th Amendment provided for the procedures necessary to replace the president or vice president in the event of death, removal, resignation, or incapacitation.  The Watergate scandal of the 1970s saw the application of these procedures, first when Gerald Ford replaced Spiro Agnew as vice president, and then again when Ford replaced Richard Nixon as president. It also came into play when Nelson Rockefeller filled the resulting vacancy to become the vice president.

While they are trying to claim Trump has acted irrationally, listen to the litany. They acknowledge Trump has made significant important changes in taxes, strengthened the military, and reduced waste. The allegations merely say he accomplished this in spite of his personality. What is really telling in that they paint him as warming to Putin and turning his back on traditional allies? Once again, they seem to be scared to death that the truth about the US interference in the Russian 2000 election is what resulted in Yeltsin turning to Putin. Just look at the timeline.

July 25th, 1998 Yeltsin appointed Putin as Director of the Federal Security Service (FSB), the primary intelligence agency and the successor to the KGB.

August 16th, 1999 the State Duma approved Putin’s appointment as Prime Minister. There were opponents who fought hard to prevent Putin’s emergence as a potential successor. Putin had not been formally associated with any party.

August 27th, 1999 Republic National Bank takes our funds, I demand to fly to Geneva to speak to Safra when the head of the bank George Wendler says he is “only the messenger.” This is when I was told Safra fled Geneva and went to Monaco “for security reasons.”

December 3rd, 1999 Edmond Safra dies in Monaco all his bodyguards were given the night off.

December 31st, 1999, Yeltsin unexpectedly resigned and, according to the Constitution of Russia, Putin became Acting President of the Russian Federation. Putin also passed that same day the decree made it a law that Yeltsin cannot be charged with corruption which is obvious that there was a problem with the whole Bank of New York and IMF missing funds incident.

January 25th, 2000; Putin consented to compromise with Duma that Yeltsin can be prosecuted for any serious crimes committed while in office with a vote of 275 to 139 on second reading. Yet, Putin would never prosecute Yeltsin.

There is something seriously wrong here. Trump is not a risk of National Security, he is a risk to the Deep State getting caught on interfering with the Russian elections. They cannot prove Trump colluded with the Russian to beat Hillary, so they are trying to paint him as crazy to invoke the 25th Amendment, That may be even harder to prove. So the main objective here is to defeat the Republicans and for the Democrats to take back the Hill in November and reverse the tax cuts. Talk Behind the Curtain is to raise taxes back to 75% to get closer to where they were before Reagan.

In case of the removal of the President from office or of his death or resignation, the Vice President shall become President.

Whenever there is a vacancy in the office of the Vice President, the President shall nominate a Vice President who shall take office upon confirmation by a majority vote of both Houses of Congress.