War and Inflation to Impact US Midterm Elections 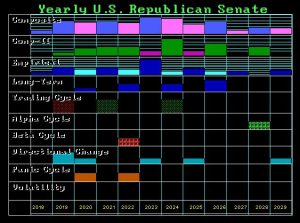 Mounting fears of war have caused many to re-evaluate who is leading them. Putin addresses his people sternly and clearly, while Biden can barely hold a press conference or read off the teleprompter. Zelenskyy has joined his troops in battle, whereas Biden cannot walk up a flight of stairs. On top of all of this is the 40-year high inflation, failed campaign promises, and financial insecurity felt by many Americans.

Six out of ten Americans have reported inflation hardships, and three-quarters admit the economy is in bad shape under Biden. A new report by ABC News and the Washington Post states that Republicans now have a 20-point lead for the midterm elections. Biden has reached a career-low approval rating of 37%, with 55% disapproving. Around 70% of the much-needed Independent voters disapprove of Biden and his policies. Americans are now twice as likely to admit they are much worse off under the Biden Administration.

“Republican congressional candidates have a 49-42 percent advantage over Democrats among registered voters, widening to 54-41 percent among those who say they both are registered and certain to vote in November,” the poll noted. ABC/Post noted that Republicans now have the largest lead in early midterm on record which dates back 40 years.

A 3-1 margin say the economy has become worse under Biden, 54-17%, with the remainder saying it has remained the same. Seventy-five percent of Americans say the economy is “not so good or poor,” which is the largest number reported since 2013. Let’s not forget how many Americans are continually impacted by Biden’s vaccine mandate that he refuses to repeal.

Our models have warned that there would be a change this US midterm election, and early polls are backing that forecast.

« Majority of US Democrats Approve of Trudeau Freezing Bank Accounts
Did Harris Set Off the Russian Invasion Telling Ukraine to Join Nato? »