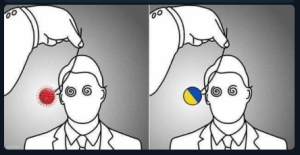 CNBC reported that Biden and Zelensky exchanged harsh words during a phone call in June 2022. After securing an additional $1 billion in funds from Americans, Zelensky said that the US needs to provide more for Ukraine. Biden losing his temper and Zelensky begging for more money are both believable situations. Similar to a child crying for dessert before dinner, Biden caved and gave Zelensky everything he wanted. Zelensky knows he can continually push for more, but that may change.

The media released this story because they want Americans to believe that the Biden Administration is finding Ukraine’s constant requests asinine at this point. The people at the voting booths this November are watching their own cities crumble and are struggling to understand why America has sent over $20 billion to Ukraine this year. The prospect of a world war has Americans even more wary of this endless support.

A Pew Research Center poll from September showed that public support for Ukraine is fading in America. Out of 10,588 respondents, 26% were no longer concerned about the war in Ukraine. In May, 55% of people cited they were “extremely” or “very” concerned about Russia defeating Ukraine, but that figure fell by 17 percentage points to 38% by September. Around 42% of Americans felt that the US was not providing enough support back in March when the war began, but that number has dwindled to 18%.

Americans are now less concerned with Russia invading other nations outside Ukraine. Putin is not interested in conquering new land, and his motives are not akin to a Hitler situation of expanding a dead empire as the media first presented. Yet, people are more concerned now about the possibility of a nuclear war, as 52% of Democrats and 37% of Republicans expressed in the Pew Research Center survey.

Sources say Ukraine would like up to $60 billion in additional funds and will continue using America and Western allies as an ATM until legislation is passed to stop this nonsense.