I went to go watch VICE – the story about how Dick Cheney took over the government with the aid of his wife – Lynne Cheney. Vice is a film that seeks to bring complicated information about the inner corruption in Washington and transform it into a digestible and entertaining format. There is no question that Christian Bale delivered a very impressive performance of how Dick Cheney really is – a secretive and distant man whose eyes were always filled with naked contempt. Amy Adams gave a fantastic performance as well and captured the real character of the former Second Lady Lynne Cheney who was very much like her husband – ambitious, and equally just as ruthless.

While the film captures the reality of what took place, it completely misses the real story behind the scenes as to even how Cheney came to be Vice President. The film shows that he was out of politics and had effectively retired for some time. It pretends that George Bush called him to be his Vice President and they negotiate that Cheney will have most of the power and Bush was too stupid to understand what he was agreeing to. 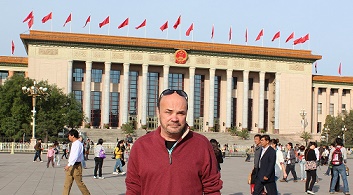 As always, for whatever reason, I seem to be always in the middle of just about every major event for the past 30+ years. I have stated before that I was asked to fly around the country and meet with Republicans who wanted to run for President. Prior to 1999, they were told I was there to advise them on the world economy and how it functioned. I have been to White House dinners and testified before Congress. I have taken calls from Washington in times of crisis. So meeting with people who wanted to run for President was nothing unusual for me.

The real issue was not that I was giving them advice, but I was to assess whether they were capable of comprehending how the world functioned economically as well as politically. I was regarded as the unbiased adviser around the world. Europeans loved me because I was not one of them. They knew I would advise according to the cycles and markets. I cannot even bring staff with me to meetings in Brussels today for the problem because they are European and will have skin in the game. The same was true when I was asked to fly to Beijing during the 1997 Asian Currency Crisis.

The real story how Cheney got that power is significantly different from how the movie portrayed that aspect. It did a fantastic job in covering what he did once in power, with the exception of the meeting when 911 took place. The film portrays everyone in that room and its sources were correct in saying they were all confused but Cheney was more concerned about talking to his lawyer in that meeting. What I do know is that the first World Trade Center bombers were in MCC prison in Manhattan and they were given markers by the recreation officer Mr. Kumb. They drew on the walls of their cell the twin towers with planes flying into them one year BEFORE the incident. In creating Home Land Security, Congress merely stated that various agencies had information but did not share it with one another. Cheney had personal offices in all the agencies and I believe he knew well what took place on 911.

The movie correctly portrays Donald Rumsfeld as his co-conspirator. Just the day before 911 on September 10th, the Inspector General reported that $2.3 trillion was missing from the Defense Department accounting. Rumsfeld stated before Congress an investigation was necessary. The next day, the plane that struck the Pentagon hit the precise room where all those records were stored.

The World Trade Center 7 collapsed like a pancake when no plane ever touched it. That building has all the evidence of many things we will never know about. I had 20 years worth of recordings that would have been enough to put all the major New York trading banks in prison. Tapes that admitted paying bribes to Russian officials to pull back all platinum for a pretend inventory and all sorts of market manipulations that even included rhodium. All of those tapes from my case vanished that same day. I personally believe that Cheney knew what was in the works. The mere fact that the terrorists drew the WTC on the wall of their cell 1 year before and the MCC took pictures and made a big deal out of it tells me that information had been passed on.

Now to the issue of Cheney becoming Vice President. I was asked to go to Texas to meet with George Bush, Jr during the early summer of 1999. I was told that “this is different. He’s really stupid.” Up to that point, the entire process I was involved in was to assess the qualification of those who wanted to run for President. Suddenly I was told this was different. When I asked why would you make someone stupid President, the response was “he has the name.”

I was then asked if I would accept the position of Chief Economic Adviser in the White House. I was told BECAUSE Bush was stupid, which they play well in the movie, that they needed to surround him with smart people. I declined because to take such a position meant I would have to shut down my operation. I said thanks, but no thanks.

The kingmakers who I would go visit potential candidates for selected the people to put around Bush – not Bush. Cheney had been Chief of Staff so he knew the game. He was inserted into the White House DELIBERATELY to be the default, President. The movie makes it sound that Bush Junior had to convince him to be his VP. That is absolutely NOT the way this selection process worked. They would NEVER have allowed the very person they said was “stupid” to select the people to run the country. They were selected to be the babysitters. I know this because I was one of the people asked and declined.