US Households Lost Over $7,400 Under Biden 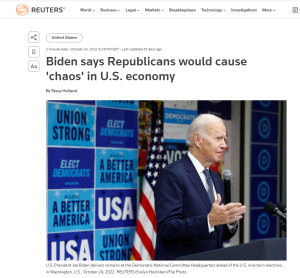 I reported in September that the Heritage Foundation estimated that the average American lost $4,200 since Biden became president. Within only a month, their analysis for October revealed that the average family had lost an average of $7,400. Around $6,100 of the loss came from annual income, while interest rates cost the average American $1,300 annually. For the analysis to nearly double in the course of a month is alarming, and it is reasonable to suspect that losses will become steeper due to current policies.

The Heritage Foundation said this estimate, obviously, does not “fully reflect the pain experienced by families.” They did not factor in losses from retirement accounts or investments. They certainly did not count the number who lost their careers due to pandemic mandates. Nor did they factor in the increased cost of borrowing money, mortgages, or the doomed bond market. They also did not factor in that he caused the public to lose all confidence in the government.

All gains under the Trump era were erased in less than two years. The changes that a new administration can implement are astronomical. The spending packages pushed forth acted as a temporary band-aid over a wound that will never heal. At least the generally uninformed public believed those packages would help, but that tide is turning as they can no longer offer unlimited free handouts. The economy was brought to a screeching halt in 2020, and absolutely nothing has been done by Washington to improve conditions since then. The spending packages lack all common sense and seem to be a deliberate attempt to hurt the country.

Anyone who wants to pay more for everything – go ahead. Those of us who voted for sensible politicians with real plans will send you the bill.

« Prepare for Election Promises to Crumble
Republicans Take the House »