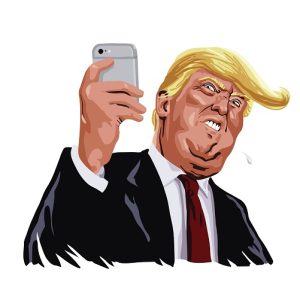 Donald Trump is the president of the world’s largest economy.
Is it the world changing when China become the world’s largest economy?
With being categorical like analytic person, defensive like a relationship person and impulsive like a social person president Trump is not the normal creative US person liking to rule the world.
He is more like French/Japanese, Chinese/Russian and Mexican/Spanish than English American.

What do you think?

ANSWER: I think Trump is a product of the times. He was elected BECAUSE he is not a career politician. His personal comments are not really relevant. He has no dictatorial power. If that were the case, he would not be in constant clashes with Congress.

The leaders of China will not be in his image. That would not come until the cycle of change was about to shift the Financial Capital of the World from China back toward Europe.

This is part of politics which has been getting worse with each passing year. I was just a kid during the ’60s and remember people arguing that electing Kennedy would mean the Pope was going to run the country. They said Jimmy Carter was a joke because he asked his daughter Amy for advice in 1980 when she was just 13-years-old. Reagan they said was just an actor. George Bush they said was ex-CIA and the deep state, Clinton was a womanizer and Hillary really ran the joint, Bush Jr. was clueless, and Obama wasn’t even an American.

There have been negative comments on every president that I can remember. None of them jeopardized the security of the United States and Trump will be no different. He tweets, and now almost all the politicians are doing it.

« Is Trump Just a Product of the Times?
A House Divided Cannot Stand »