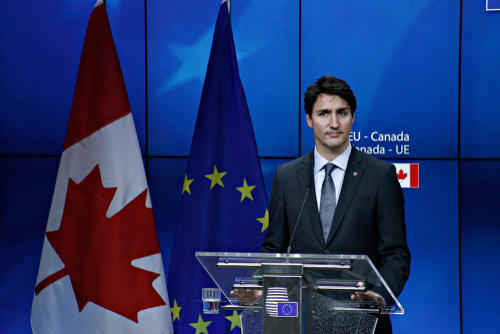 The worldwide plot of the left to effectively overthrow Democracy is alive and well in Canada as well. The emergency bill introduced by Trudeau would grant cabinet sweeping powers to tax and spend without parliamentary approval through the end of 2021. In other words, Trudeau is using this manufactured crisis to eliminate democracy in Canada altogether.

Prime Minister Trudeau addressed Canadians on the Coronavirus manufactured panic on March 23, 2020.  Trudeau’s government is planning to grant itself wide-reaching new powers to tax and spend without parliamentary approval. Thirty-two MPs, divided proportionally based on party standing, will be in Ottawa to debate the bill being tabled on today. Like the Democrats in the United States, Trudeau is seeking powers that go well beyond any measure for a short-term crisis which is probably why they have fake research claiming this will last for 18 months when no such virus has done that. Once the powers are seized, the provisions will give a minority government the power to act unilaterally for 21 months. This is clearly a political coup taking place in Canada as well with the shrinking leftist side making a desperate attempt to overrule any democratic process.

The bill will allow Trudeau to impose anything with respect to taxation. Everywhere we look, the left is rising and seeking undemocratic powers in many places throughout the West.