The Shift in Small Donations to Trump 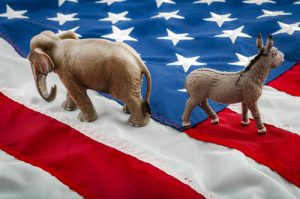 There is a major shift taking place within the Republican party that has some people on the Hill taking notice. Traditionally, the Republicans have had the image that they are the party of the rich and corporations, despite the fact that the bankers would not donate to Trump in 2016 and it all went to Hillary.

The donation patterns have completely changed and flipped upside-down with President Trump. Analysis of campaign finance data which has been released shows that over 60% of all the money raised has come directly from small donors of $200 or less, according to Federal Election Commission figures.

This demonstrates that despite all his tweets and the media bashing, there is a rising trend of voters who support Trump simply because he is not one of the career jockeys. The Democrats appear ready to put Joe Biden out front, although he has been gathering only 24% of the votes so far in the polls on debates.

Bernie and Warren are just too far out there for middle America, regardless of being Democrat or Republican. Thus far, it still appears that Trump will win the 2020 election which may be a very good thing since we are facing the Monetary Crisis Cycle in 2021/2022 where we will most likely be in a position where negotiations on the restructuring of the system will be a critical issue. The last thing we need is a career politician from either party to reset the world monetary system. Look at what career politicians have done in setting up the Eurozone — the elimination of Democracy.

« Kamala Harris – Medicare for All
Democrats on Securing the Border »