The Make America Great Again was actually a slogan used by Ronald Reagan who became one of the more popular presidents in postwar history. A Tennessee man is in jail after being accused of pulling a gun on a Sam’s Club customer Saturday 16th of February because he was wearing one of these hats. The joke used to be if you wanted to commit suicide you just had to confront a cop. Now the cop is being replaced by just a Democrat. 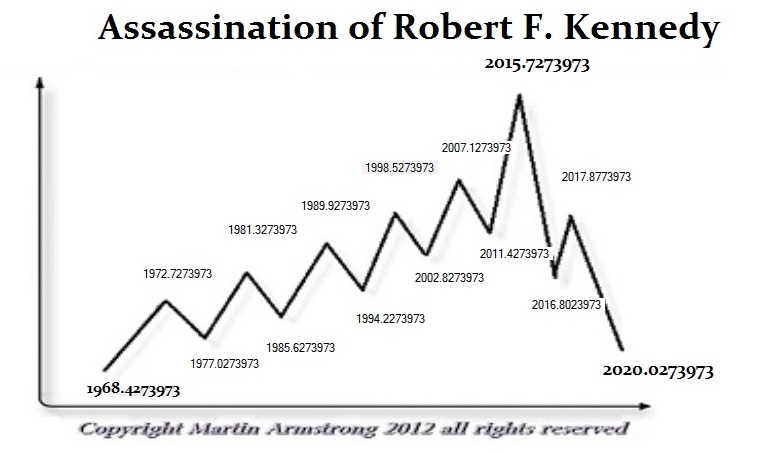 The number of incidents are rising dramatically. Unfortunately, our computer is forecast a sharp rise in violence in 2020. On June 5th, 1968, presidential candidate Robert F. Kennedy was mortally wounded shortly after midnight at the Ambassador Hotel in Los Angeles during his presidential campaign. Earlier that evening, the 42-year-old junior senator from New York was declared the winner in the South Dakota and California presidential primaries in the 1968 election. Every aspect we run on our models concerning the 2020 election shows a sharp increase in violence that should rise to what we saw during 1968.

Even the Robert F Kennedy assassination running a 51.6-year wave aligned with the peak in the ECM in 2015. The ECM was 2015.75 and the Kennedy Assassination was due 2015.72 for a peak. No matter what we look at, 2020 is not going to be a quiet year. It appears that all this political obstruction and constant hatred being poured out by the press against Trump will fuel less intelligent people to see him as the Devil incarnate who must be stopped at all costs. This is not going to end nicely and the politics have crossed the line becoming more hate speech with deadly consequences. Neither side will accept the result.

« Karl Marx’s Grave Vandalized – Is this the Cyclical Turning Point from the 1848 Revolutions?
How 10% of the People Can Make a Difference & Real Estate’s Role »