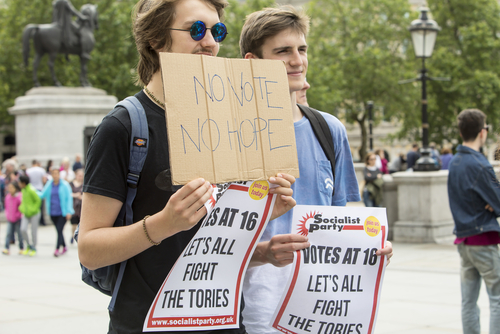 There is a rising tide that many people are not paying attention to. That is the rising unrest among the youth. The problem with allowing the youth to vote on economic issues is simply they want to rob others so they have their free world of education, spring breaks, and parties. In Britain, they have been fighting to bring the age to vote down to 16. How can someone make any intelligent decision concerning the fate of the nation before they even have a job and pay taxes?

When it comes to war and if they are to fight such a war, then absolutely, they should have a right to vote. But when it comes to economic policies, you should not be allowed to vote unless you pay taxes. If you do not have a job, it is always easy to demand socialism to go rob someone else who has what you want. If you walked down a street and you are grabbed and told you cannot leave until you hand over money, isn’t that a crime? Yet somehow we elect politicians who will do that exact thing under threat of imprisonment if you do not hand over whatever they demand.

How can a man write a book and explain how it feels to go through childbirth? It’s impossible! The same applies to voting. If you want to vote on anything that involves economics, you should have a stake in the process by paying taxes. Otherwise, go to your party with friends and complain about the world until you are old enough to know what the world really is – it’s not spring break!

Allowing everyone who has no stake in the game vote against others who do, it not Social Justice – it is servitude. Sorry, it is not “no vote no hope”, it is “no vote if not responsible”.