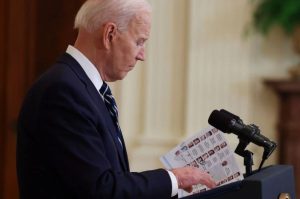 Where is the American president? No one has done more to stay out of the public eye than Joe Biden. Biden quickly passed 76 executive orders during his presidency, yet only speaks to the public on rare occasion. The Federalist noted that Joe Biden has appeared for a mere 18 interviews this entire year. In comparison, Trump had appeared 89 times during the same timeframe which does not include his daily updates to the public through Twitter. Biden certainly did not take a page from Obama’s book as his people had him on a media darling tour, appearing 141 times in one year.

The current president’s incompetence is on full display every time he speaks, despite scripted speeches and soft questions from pre-screened reporters. The man has only held six solo press conferences — six. He has never appeared in the James S. Brady Press Briefing Room as he would be exposed to actual reporters who may ask real questions on behalf of the American people. Trump held 35 solo press conferences the year prior and was willing to speak to anyone. When I visited Mar-a-Lago at the beginning of 2020, I personally saw Trump take a scripted speech and throw it out. He was candid and personable. Biden appears so infrequently people have begun half-jokingly questioning if America currently has a president, and there is a reason that he remains an invisible president. If anyone permitted Joe Biden to speak candidly, the people would realize that the man running the country is in a state of cognitive decline and unfit to hold office.

« Why Medicine is Doomed When Politics Gets Involved
AOC: Rules for Thee but Not for Me »